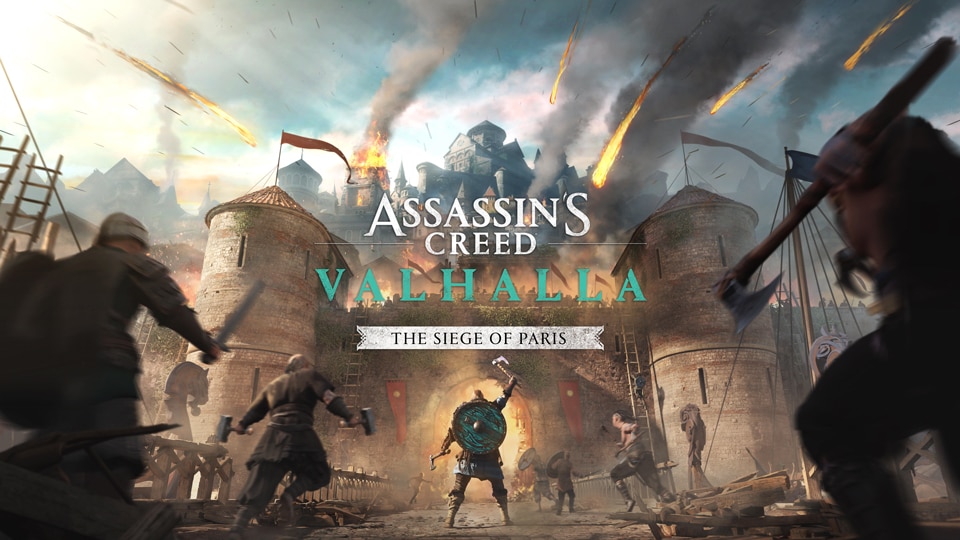 Assassin’s Creed
Valhalla’s second
major expansion, The Siege of Paris, launches on August 12, and takes Eivor to
France to conquer new lands, battle new enemies, and build new alliances. While
we have to wait a few weeks to experience The Siege of Paris first-hand, we get
our first tease of the all-new soundtrack – composed by violinist and composer
Stephanie Economou (“Mulan,” “Jupiter’s Legacy,” “The Martian”) – today. The
track, “Hásæti,” is available now to listen to,
while the full soundtrack will release alongside The Siege of Paris expansion on
August 12. To learn more about “Hásæti” and the entire album, check out our
interview with Economou below. What was your familiarity with Assassin’s Creed Valhalla before you started
working on The Siege of Paris soundtrack?

Stephanie Economou: I wasn’t super familiar with the Valhalla narrative, but
I had listened to Sarah
Schachner,
Jesper
Kyd,
and Einar
Selvik’s
music for the
game,
which I’m a huge fan of. They crafted a really special space creatively, and I
was excited to have a small part in telling the story of The Siege of Paris.

What was the first thing you did to prepare when you started composing the
soundtrack? What sort of research goes into composing a historical soundtrack?

SE: I did a lot of research prior to starting the score. This historical
event of the Siege of Paris took place in the year 885, so I set out to discover
what the music of France sounded like during that time. As it turns out, there’s
very little surviving record of musical repertory, other than sacred or
liturgical music, so I borrowed from ancient instrument palettes of slightly
later eras, like the Medieval and Renaissance periods. This is how instruments
like the viola da gamba, vielle, hurdy gurdy, lyre, kantele, dulcimer, frame
drums, and didgeridoo became part of the fabric of the score. I also
incorporated more modern instrumentation, such as viola, cello, and bass, but
played in a more primitive way, either scratched aggressively or hit with wooden
sticks.

Vocals also became a large part of the sonic landscape. You can hear siren calls
and layers of chanting in Old Norse, Latin, and French performed by the
incomparable singer Ari Mason, who also recorded viola da gamba.

Though the score is entrenched in this acoustic world, I wanted to frame the
music in a less traditional way, so you’ll often hear these instruments detuned,
liberally sliding between notes, and unconventionally scraped or hit
percussively. They are also treated with modern production, giving the raw sound
palette a processed, distorted edge.

Did you go back and listen to the game’s original soundtrack? What things did
you learn or take away from it?

SE: I familiarized myself even more with the original Valhalla soundtrack
when starting on The Siege of Paris. It helped me get into a unique creative
headspace where I could explore less-traditional methods of scoring and
different production techniques. Having an inspiring reference like the original
soundtrack encouraged me to challenge my normal composing methods, which was a
really crucial and rewarding process for me.

SE: I am primarily a violinist/violist, so when I was able to track down a
vielle – the earliest version of the modern violin – I was really excited at the
prospect of using it in the score. There was a bit of a learning curve in
playing it, as the body of the instrument is quite boxy, and the bridge is less
curved than a modern violin, but there was something really thrilling about
learning to play an instrument whose origins trace back to the Medieval era. I
also procured a kantele, lyre, cello, and bass, all of which I recorded in my
home studio. I definitely would not say that I proficiently learned these
instruments; rather, I harnessed a certain sound on each of them by playing them
in the most basic, crude way imaginable. The result ended up sounding raw,
rough, and unsophisticated, which I suppose was the happy accident that came out
of me clumsily fumbling around while discovering these amazing instruments.

Though I didn’t perform it, Ari Mason happened upon a unique sound when she
recorded, intertwining layers of rhythmic plucking on her viola da gamba. She
hadn’t tried this technique before, but there was something elegant and refined
about it, which felt to me like what Paris could have sounded like in 885.
Having the opportunity to capture an ancient sound from a modern perspective,
with modern technology and production, felt simultaneously bold and
sacrilegious. It was rather fun.

Fans can listen to the track, “Hásæti” today. What can you tell them about
this track specifically? What would you like them to take from it?

SE: “Hásæti” was a really special track to compose, as it accompanies an
important emotional moment in our story. I wanted to evoke a sense of
spirituality and depth in the music, and vocals felt like the right avenue to
explore. The lyrics are in Old Norse, with “Hásæti” translating to “Seat of
Honor.” The vocals, again performed by Ari Mason, are accompanied by string
chords with a low frame drum beating along underneath, which was meant to give
it a feeling of finality. It also features a high Viking horn call, used
throughout the score as a kind of summoning to duty.

The main track, “The Siege of Paris” will be released when the full soundtrack
is out. What sort of feeling and emotion did you want to illicit in the main
theme?

SE: This track was actually one of the last pieces I wrote for the game, but
it uses the main theme I composed early on in the process, which is heard on the
first track, “Francia,” on woodwinds and viola da gamba. I usually like to start
out every score by finding a melody that I think is fitting for the story and
has the capacity to evolve and be used through different lenses. Composing the
final track, “The Siege of Paris,” was especially enjoyable because I got to
employ the theme in the context of a more action-oriented cue, with layers of
violent short strings, screaming shawms, and scratchy bowed rhythmic cells. I
wanted to hone in on what it might have felt like to storm the gates of Paris;
there would have been a chaotic danger and energy, but also a sense of purpose
and honor. These were the motivating factors I had in mind when composing this
piece and the entire score itself.