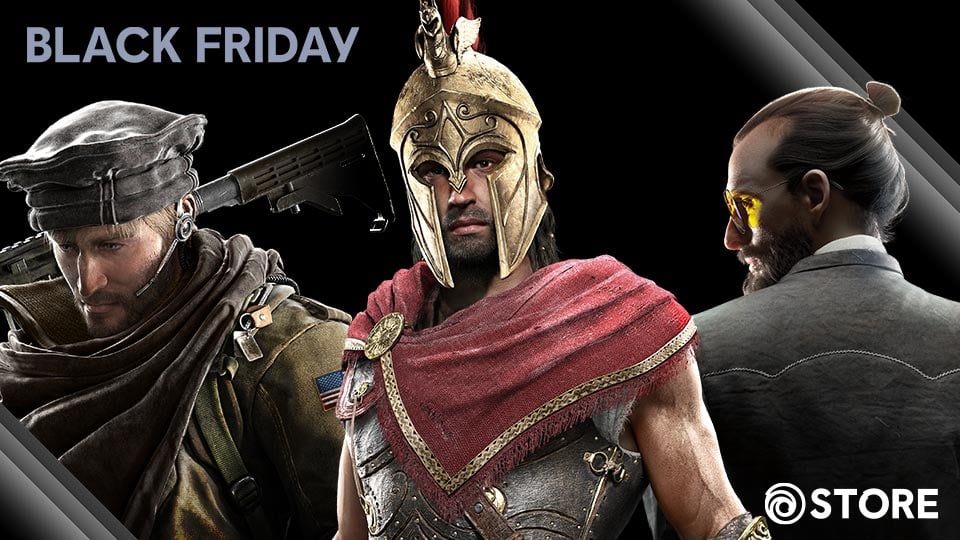 Black Friday deals on Ubisoft games have arrived at the Ubisoft Store, the Microsoft Store, the PlayStation Store, and the Nintendo eShop, bringing big digital discounts for Assassin's Creed Odyssey, Far Cry 5, Rainbow Six Siege, The Division, Ghost Recon Wildlands, and many more. You can view a sampling of what's available by checking out the list below. Save money. Skip the lines. Get a gift for yourself or that special someone. And best of all, if you spend over $40 at the Ubisoft Store, you can snag the PC version of Rayman Legends for free!

These and discounts on physical versions of games (save up to 50% on Assassin's Creed Odyssey, 70% on Rainbow Six Siege, and more) are available from November 16 through November 28. Visit the Ubisoft Store for more details and up-to-date discounts.*

*Discounts and offers may be different per region.

Assassin's Creed Odyssey – Save up to 35% on Digital

Pick up Assassin's Creed Odyssey, the epic open-world RPG, for its lowest price ever. During the Ubisoft Store Black Friday sale, players can jump into a massive Greek adventure as Kassandra or Alexios for 33% off the Deluxe and Standard Editions of the game, or 20% off the Gold and Ultimate Editions. Assassin's Creed Odyssey will also be up to 35% off on Xbox One and PS4 via the Microsoft Store and Playstation Store, respectively.

For more deals and discounts on Assassin's Creed Odyssey, visit the Ubisoft Store.

Assassin's Creed Origins – Save up to 67% on Digital

Save Ancient Egypt, battle cursed Pharaohs, and begin the Brotherhood in Assassin's Creed Origins. Last year's entry in the Assassin's Creed franchise will see all prices reduced by 60%. Not only are the Standard, Deluxe, and Gold Editions available for 60% off, but so are the Season Pass, each of the two post-launch stories (The Hidden Ones and The Curse of the Pharaohs), and the standalone version of Discovery Tour. Assassin's Creed Origins will also be on sale for up to 67% off via Microsoft Store, and 60% off via Playstation Store.

For more deals and discounts on Assassin's Creed Origins visit the Ubisoft Store.

The entire USA can be your motorsports playground if you snag The Crew 2, which will be on sale for up to 60% off. Discounts apply to the Standard, Deluxe, and Gold Editions, all of which include access to the free Gator Rush expansion and its new hovercraft events. The Crew 2 will also be available for up to 60% off on Xbox One and PS4 via the Microsoft Store and Playstation Store.

For more deals and discounts on The Crew 2, visit the Ubisoft Store.

Hope County is home to vibrant wildlife and beautiful scenery, but there's something sinister brewing in the Montana wilderness. Behind the serene vistas, a doomsday cult called The Project at Eden's Gate works to strengthen its numbers under the leadership of Joseph Seed. You can help thwart his plans and save the residents of Hope County by picking up the Far Cry 5 Gold Edition at a 50% discount. The Season Pass and Standard Edition of the game are also on sale at 33% and 50% off, respectively. On consoles, meanwhile, Far Cry 5 will be up to 50% off on Xbox One via the Microsoft Store, while PS4 owners can grab it for up to 55% off from Playstation Store.

For the latest deals on Far Cry 5, visit the Ubisoft Store.

For more deals and discounts on For Honor, visit the Ubisoft Store.

South Park: The Fractured But Whole – Save up to 75% on Digital

If you have yet to experience the New Kid's superhero adventure with Coon and Friends, now's your chance. South Park: The Fractured But Whole is getting a 75% discount on its Standard and Gold Editions, while the Season Pass clocks in at a 50% discount – as do all three pieces of post-launch content (Danger Deck, From Dusk Till Casa Bonita, and Bring the Crunch) if you purchase them individually. South Park: The Fractured But Whole will also be available for up to 70% off the Microsoft Store, up to 75% via Playstation Store, or up to 60% on Nintendo Switch via the Nintendo eShop.

For more deals and discounts on South Park: The Fractured But Whole, visit the Ubisoft Store.

Tom Clancy's Ghost Recon Wildlands – Save up to 70% on Digital

If you're ready to start fighting a clandestine war against the Santa Blanca cartel, meet the likes of Sam Fisher and the Predator, and match wits against your fellow Ghosts in the PVP Ghost War mode, you're in luck: Ghost Recon Wildlands' Standard, Gold, or Gold Year 2 Editions can be yours for up to 50% off. Meanwhile, those who already own the base game can get the Year 1 and Year 2 Season Passes for 25% off each. Ghost Recon Wildlands will also be up to 60% off on Playstation Store, and up to 70% off via the Microsoft Store.

For more deals and discounts on Ghost Recon Wildlands, visit the Ubisoft Store.

Tom Clancy's Rainbow Six Siege – Save up to 70% on Digital

If you haven't experience the intense, tactical shooting of Rainbow Six Siege, then you're in luck, as all editions of the game are set to receive a big discount. From November 16-28, the Standard, Gold, Complete, and Advanced Editions will all receive a 65% discount. The Starter Pack and Year 3 Pass, meanwhile, will each be available at a 30% discount. The Xbox One version will also be discounted up to 70% off on Xbox One and PS4 via the Microsoft Store and Playstation Store.

Tom Clancy's The Division – Save up to 80% on Digital

The Agents of The Division are trying to save what's left of New York after a deadly virus devastated the city, leaving violent factions struggling for control. You can join the fight with a 75% discount on the Gold Edition of the game, or if you're already an active agent and want to get more content, all of The Division's DLC and its three expansions (Underground, Survival, and Last Stand) are also available at a 75% discount. Discounts on consoles are even heftier, with the Xbox One and PS4 versions available for up to 80% off via the Microsoft Store and Playstation Store.

For more deals and discounts on The Division, visit the Ubisoft Store.

The San Francisco Bay Area is a hacker's paradise in Watch Dogs 2, and you can start hacking, sneaking, shooting, and driving for up to 70% off the Standard, Deluxe, and Gold Editions. The 70% discount also applies to all of Watch Dogs 2's DLC, including the story-driven Human Conditions and No Compromise post-launch content. On consoles, Watch Dogs 2 will be up to 70% off from the Microsoft Store and Playstation Store.