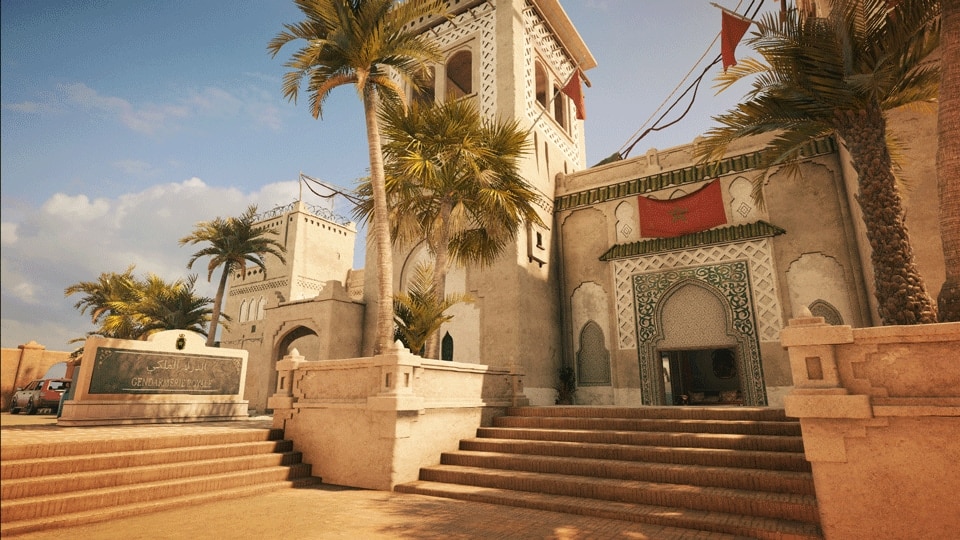 Operation Wind Bastion is coming to Rainbow Six Siege, and it's introducing two new Moroccan Operators – an Attacker, Nomad, and a Defender, Kaïd – as well as a new map, Fortress, set in the beautiful North African countryside. Players who own the Year 3 Pass will have immediate access to Nomad and Kaïd when Wind Bastion launches on PS4, Xbox One, and PC. All other players will be able to unlock them one week later.

Nomad is a two-speed, two-armor Operator who packs quite a punch thanks to her AirJab launcher. Airjabs are sticky, proximity-triggered air-blast grenades that shove Operators back and throw them to the ground. The proximity trigger means you can deploy it as a trap to cover your flank, or go on the offensive and use it to knock Defenders out of cover. Operators caught in the blast radius are unable to shoot, and are left vulnerable for a few seconds while they recover. The Airjab charge doesn't do any damage by itself, but it will knock down Nomad and her teammates if they're caught in its blast radius, so placement is key. Operators who are thrown back into a soft wall will break completely through it, opening up the map and creating new lines of sight for you to take advantage of with Nomad's AK74 or AR X-200 assault rifles.

Once you've secured an area or planted a bomb defuser, AirJabs can be used defensively to protect an objective location, buying you valuable seconds while the clock ticks down. Nomad is a particularly strong pick against Clash, as Airjabs force Clash to place her shield on her back while she collects herself, but Jager's ADS can neutralize Airjabs if they're caught along their trajectory.

Their small size and deployment versatility makes Electroclaws difficult to spot and pick off, which means Maverick won't be able to easily find and destroy them, but they're far from invincible. IQ can spot them, Thatcher's EMP grenades can destroy them, and Twitch's drone can shoot them. Keep in mind that they take a few seconds to activate, so while quick reflexes will help you counter a Hibana breach, it'll be too late for Electroclaw intervention by the time you hear Thermite breaching.

As a one-speed, three-armor Operator, Kaïd is a strong anchor for any defending team, and he can do significant damage with his AUG A3 SMG or TCSG12 semi-automatic shotgun. Both Nomad and Kaïd pack a powerful .44 Magnum sidearm that comes equipped with an ACOG-equivalent scope, so you're ready for a firefight at any range.

Alongside Nomad and Kaïd, Operation Wind Bastion will include a new, free map for all players. The new map, Fortress, is modeled after Moroccan Kasbah architecture, and is filled with intricate mosaics and colorful stained glass. As its name suggests, Fortress functions as a military training facility and Kaid's home. The map features two interior floors with two objective sites per mode on each. With plenty of exterior stairs, the ability to rappel to the rooftop from nearly all sides, and towers that only Attackers can access to enter the second floor, Fortress offers plenty of ways for the Attacking team to methodically close in on objectives from above. Each objective site offers its own distinct tactics, and it'll be up to you to discover them all.

Operation Wind Bastion is set to cap off Siege's third year. For more on Rainbow Six Siege, check out our previous coverage.