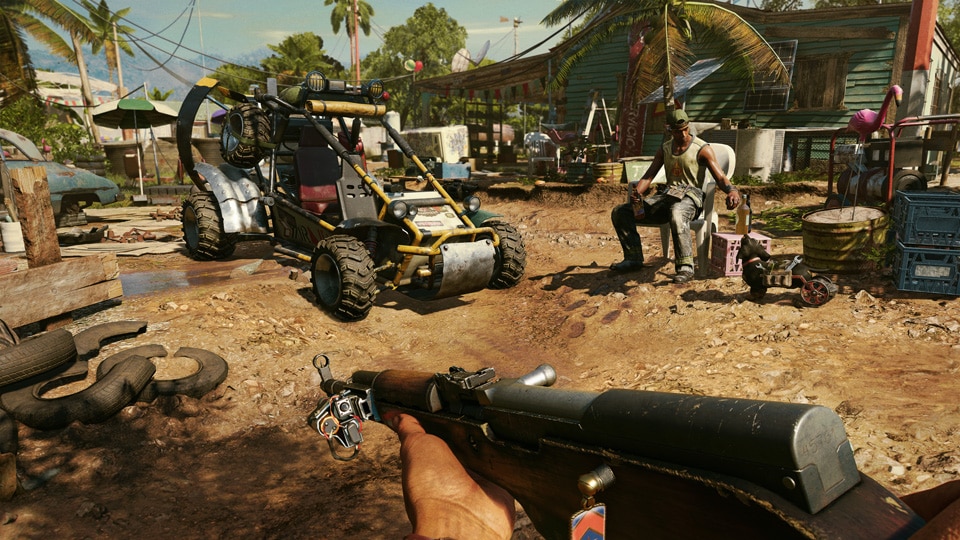 ’Resolver’: How Far Cry 6 Was Inspired by Cuba’s Philosophy of D.I.Y.

Yara, the fictional setting of Far Cry 6, takes much of its inspiration from Cuba, and its “resolver” spirit is a hugely important part of that inspiration. In English, the word “resolve” has a few different meanings. As a verb, it can mean to deal with something successfully, to work something out; as a noun, it signifies determination or persistence. Which makes the Cuban concept of “resolver” (pronounced “rreh-sohl-BEHR”) in Far Cry 6 particularly interesting — because it’s pretty much all of the above.

“Resolver,” translated literally from Spanish, simply means “to solve.” But in Cuba, the word has taken on a far more complex and interesting meaning. Due to decades of scarcity brought on by trade embargoes and, later, the collapse of the Soviet Union, Cubans were forced to figure out how to make do with extremely limited resources. As a result, “resolver” has become a sort of unofficial national motto, encompassing the concepts of resourcefulness, improvisation, and tenacity — a determined do-it-yourself mindset that makes the best of what’s at hand.

“Because importing items was so challenging, Cubans had to make do with whatever they already had on the island,” says Lead Game Designer David Grivel. “That’s why, for instance, we see so many American cars from the ‘60s still running over there. But ‘resolver’ is not just about maintaining objects, it’s also about creating new ones. In our research, for example, we were inspired by things like a desk fan made out of an old vinyl record player!” 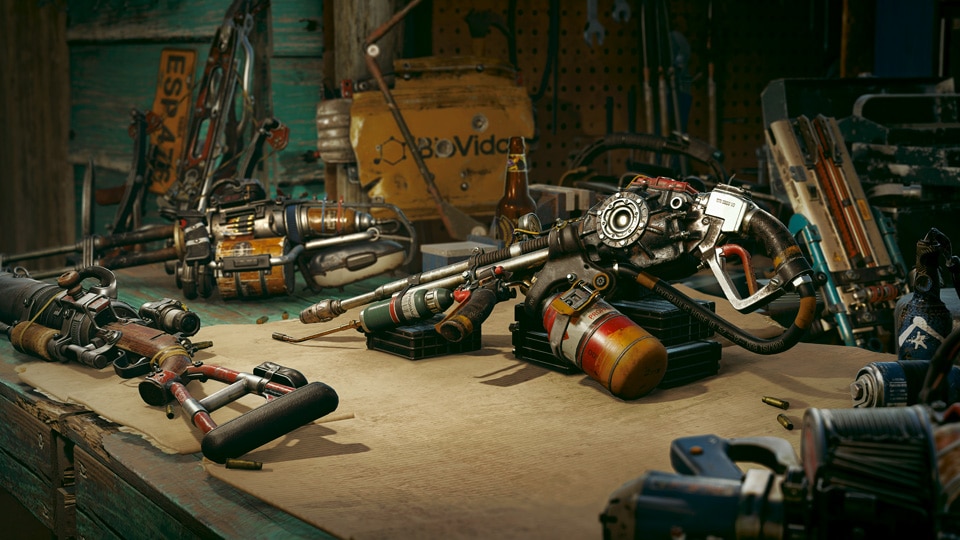 Of course, main character Dani Rojas will be too busy conducting a revolution to spend much time fixing cars or building desk fans. But the “resolver” mindset still plays a huge role in the game — just in a somewhat more... aggressive way.

“In Far Cry 6, ‘resolver’ is all about turning the player into a one-guerrilla army,” Grivel says, “and inflicting the maximum amount of chaos with what they have.”

This manifests in a lot of different ways, from scrounging gear to kitting out vehicles to hacking together weapon mods. But it’s most prevalent in two key types of gear. First are Resolver Weapons. These are specially crafted, utterly unique armaments built from the ground up with scavenged bits from countless other sources. 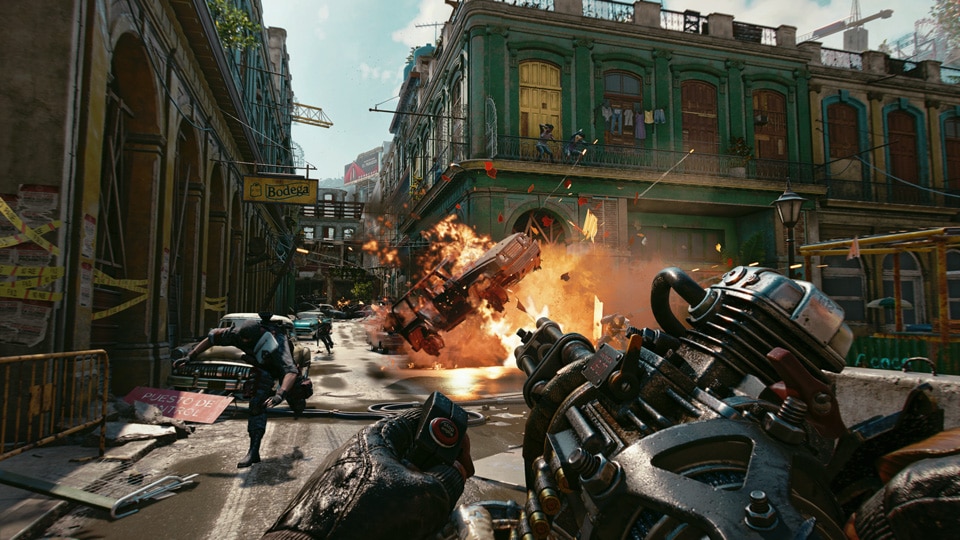 “An example that jumps to mind,” says Grivel, “is one of my favorites: ‘El Pequeño.’ It’s a minigun made out of an old motorbike engine. It’s absolutely deadly — and it sounds really cool!” (We’re guessing it’s named “the little one” ironically.) Other Resolver weapons use gasoline pump handles, car batteries, bicycle grips, and even CD players.

And second: Supremos. You can call them “backpacks.” These back-mounted behemoths give players a huge advantage, albeit a time-limited one. A massively powerful flamethrower is one example, while another provides a dramatic boost to healing. And one particularly destructive type, the Exterminador, lets players unleash a barrage of auto-targeting missiles. Of course, you can’t just wander around blasting off rockets every couple of seconds; each Supremo has a cool-down period once used, so they will often be items of last resort. But once the cooldown time is up...well, so is your enemy’s. 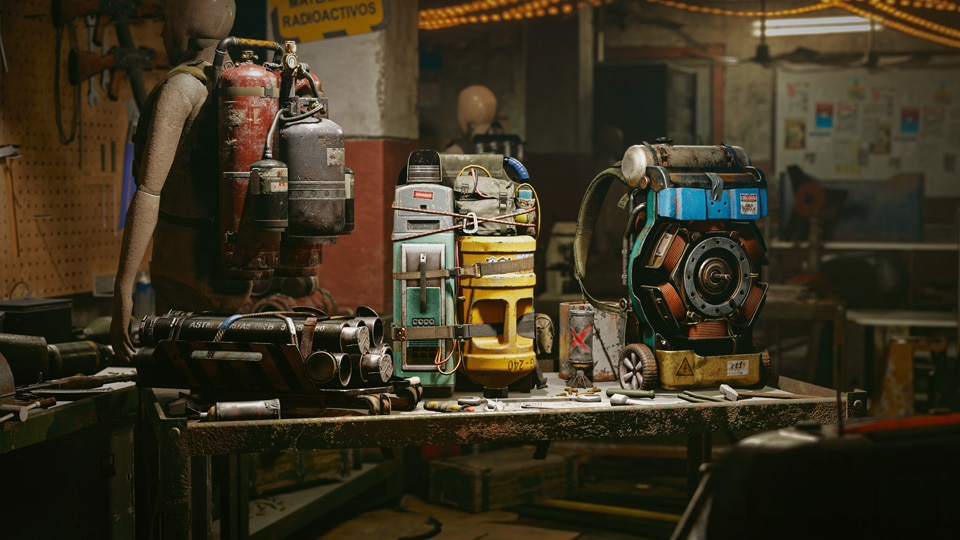 Naturally, cobbling together such intense weaponry requires a certain set of skills. That’s where Juan Cortez comes in.

“Juan is Dani’s guerilla teacher,” Grivel says. “He’s the one who introduces you to the ‘resolver’ philosophy. He’s the master craftsman; the one you go see when you want cool new Supremos, gadgets, and Resolver Weapons to play with.”

“But he’s more than that,” says Grivel. “He’s a real mentor to Dani.” That’s because he doesn’t just have the skills to build D.I.Y. weapons; he also has the experience to know when and how to use them. “His past isn’t clear,” Grivel says, “but what’s for sure is that he’s been part of quite a few revolutions already.” That experience will prove invaluable in learning to use Resolver Weapons, gadgets, vehicles, and other gear in the most efficient and effective way. The “resolver” way, in other words. 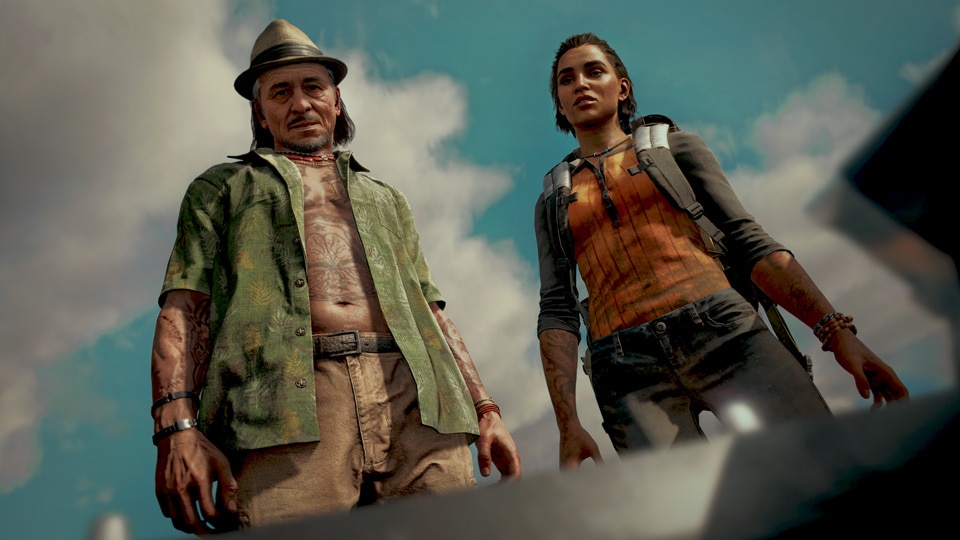 One interesting result of including this homebrew philosophy in the game is that the customization lets players embody their own, very personal version of Dani. Of course, Far Cry games have always given players the ability to approach objectives in a huge variety of ways. But Far Cry 6 takes that idea to new heights. If you prefer a stealthy approach, for example, you won’t just have weapons and gadgets that support stealth play, but you’ll also be able to equip specific mods and specific clothing to explicitly enhance stealth.

“There’s fire-retardant gear for hot situations, and a stealth outfit that reduces your movement noise and detection,” says Grivel. “There’s gear to improve the tagging of enemies and overall intel-gathering, and gear to improve your hunting skills. We support all kinds of playstyles –– there are weapons and gear for every type of player.”

Of course, you don’t have to specialize; you can mix and match gear, weapons, and mods to your heart’s content, and you can save loadouts to swap between as the situation calls for it.

“I love mixing long-range sniping, stealth, and mobility,” Grivel tells us, “so I love equipping gear that allows me to be better at each of these aspects: shoes that make less noise when you move, pants that help you carry more sniper ammo... One piece of gear I absolutely adore is the ‘parkour pants,’ which allow you to gain speed after a slide. It’s a ton of fun to execute, so I usually equip that gear when exploring, slide down a hill, get up, get a speed boost and keep going. That’s one of my favorite ways to get around. And it’s a fantastic combo in a combat situation!”

If this sounds like an unbelievable amount of variety, well, you’re starting to get the potential of the “resolver” mindset. It’s about resourcefulness and creativity; not just “making do” with what’s at hand, but making it better. That’s an attitude that runs through Far Cry 6 from top to bottom, and when you step into Dani’s shoes, you’ll see that in a revolution, there’s no better weapon.

Far Cry 6 will release on October 7 worldwide on Xbox Series X|S, Xbox One, PlayStation 5, PlayStation 4, Stadia, Amazon Luna, and for Windows PC exclusively on both the Epic Games Store and the Ubisoft Store. The game will also be available on Ubisoft+*, Ubisoft’s subscription service.

* $14.99 per month. Cancel anytime. The Ultimate Edition will be available as part of a Ubisoft+ subscription. More information at ubisoftplus.com.