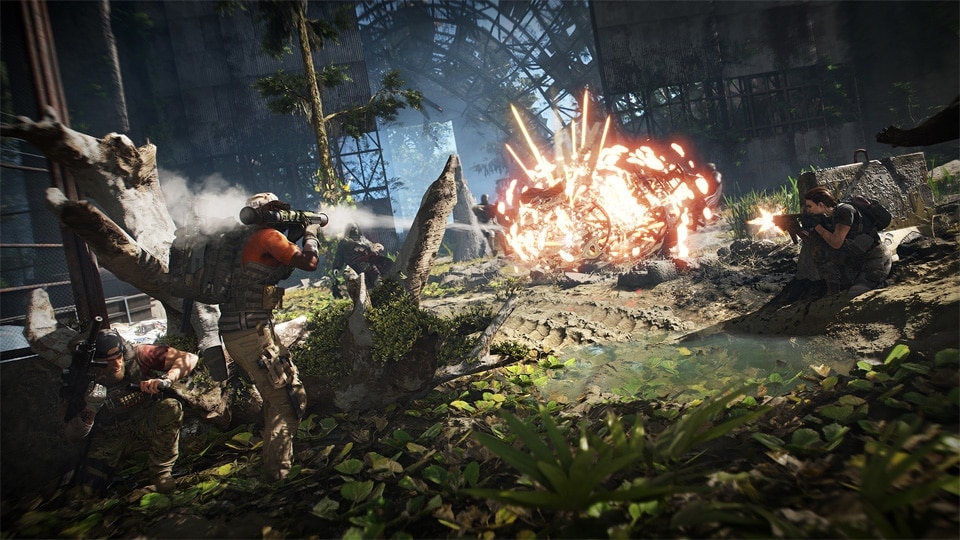 Ghost Recon Breakpoint's war between the Ghosts and the rogue Wolves erupts on Auroa, a massive archipelago where cutting-edge infrastructure coexists with vast stretches of drone-patrolled wilderness. Auroa is one of Ubisoft's biggest and most diverse open worlds to date, home to cities and agrarian villages, gleaming research facilities and imposing military camps. And if you really dig in and explore, you'll discover mysteries left behind by centuries of tumultuous Auroan history.

All of these elements combine to create a multilayered, lived-in landscape designed to reward exploration and continually create new challenges. Auroa's distinct biomes – including rainforests, salt marshes, high cliffs, arid rain shadow, fjords, high tundra, and meadowlands – contain 365 named natural features, including rivers, streams, and mountains. (You'll need to pay attention to those names, because intel will often use them to direct you to mission objectives, rather than plunking a GPS marker on your map.) You'll be able to rest at 109 different bivouac sites, explore 332 miles of road, visit 298 villages and camps, and discover 793 hidden places, including abandoned shelters, mines, and remote Skell outposts. But numbers alone don't tell the whole story.

"It's not just building a landscape and dropping some stuff on it," says Benoit Martinez, lead environment artist and technical art director at Ubisoft Paris. "Every part of this ‘cake' that you're crafting has to be meaningful, and related to the other layers; there are multiple dependencies in every direction. It was really important that people's interest is sparked by Auroa, and Skell, and drones, and technology – but there's more to find out."

Martinez began working on the franchise with Ghost Recon Future Soldier, and went on to lead the creation of Ghost Recon Wildlands' environments. When building Auroa, he and his team created a fictional backstory for the archipelago that stretches back 80 million years, to when it first broke away from the landmass that would eventually become New Zealand and Australia.

Auroa's first inhabitants, known as The Kings of the Forest or The Forgotten, vanished long ago, leaving only relics of their ancient civilization. Beginning in the 16th century, Europeans discovered Auroa and attempted to colonize it with sea forts and trading posts, but were eventually run off by the locals. In the 19th century, however, Europeans came back in force, this time in search of gold, and established more permanent settlements. Auroa would later become a strategic location during World War II, and then home to American airbases during the Cold War.

Remnants of all of these stages of settlement can be found throughout the archipelago, ranging from ancient temple-like sites and crumbling shacks to abandoned underground military bases. One feature Martinez is particularly fond of is an old, disused train line, marked by the rusting, upended hulks of old train cars once used to transport gold. Finding the track and following it, Martinez says, will take you on a journey across the entirety of Auroa, with tunnels and bridges that will take you through all of Auroa's diverse environments. "Everything's consistent," Martinez says. "If you keep following snow, you'll find some streams, and you'll find some rivers, and you'll see some people digging for gold along the river, and all the rivers lead to the sea. Each part is not just crafted individually; it's all a big, consistent landscape we've placed, that makes sense according to the landscape itself."

In addition to the old train tracks, there's another, more modern transit line built by Skell Technology, the drone-making corporation that set up its expansive headquarters on Auroa until the Wolves staged a coup. Martinez and his team thought carefully about how Skell would have approached developing the landscape, and what they'd need to create a self-sustaining colony. They began by looking at what was appropriate for each environment, and creating a series of "provinces" that each serve a different purpose.

"Here, they build dangerous stuff," Martinez says, pointing to a region of the map marked "Lethal Drone Production." He then points to a region labeled "Auroa Security," which, in addition to containing Skell's security forces, also protects the archipelago's power facilities. Other regions are dedicated to industries like AI and technology research, supplying factories, and providing living areas for Auroa's residents. Martinez's team also took the daily lives of those residents into account when planning Skell's settlements. Where would they live and work? How would they get around? What kinds of things would they want, day-to-day? So in addition to research facilities, factories, and drone testing sites, Auroa also features places like drone-maintained farms, as well as a winery and a brewery ("Because of course," says Martinez).

Outside of Skell's facilities, you'll also come across homesteaders who were there long before Skell's arrival, and who refuse to take anyone's side as the conflict spreads around them. More ominously, you'll also find plenty of military checkpoints and camps along the roads. Initially set up by Skell's former private military protectors following a terror incident, these are now manned by the Wolves, their drones, and their PMC flunkies, and present a dangerous challenge for the Ghosts to overcome and conquer.

"Wildlands was about ‘How big can we get, building an open world at this scale, with a lot of detail?'" says Martinez. "For this one, starting with all of that, with all the tools and everything we needed, it was ‘How can we bring much more detail, much more diversity? How will we get in the tiny details for all the landscapes, all the architecture, all the vegetation, the wind, the lighting, the water, the waterfall, the ocean, the snow, and to make every setting unique, with consistent and great detail?'"

One of the answers comes in the form of Breakpoint's new water and vegetation systems. These enable the developers to do things like scatter tiny objects across larger objects, creating the illusion of, say, chunky mud splatters across your body when you go prone and camouflage yourself. It's a technique that also helps the artists create dense-but-detailed vegetation, including moss and creeping ivy, or foliage that moves believably as wind passes through it.

As big as Auroa is, Martinez says, it'll get even bigger post-launch. More islands will be added to the archipelago over time, bringing new adventures and gameplay opportunities.

"We build big and detailed, because we think the journey is an important part of what we are doing here," Martinez says. "Yes, it's about combat, it's about finding your way out, but it's also about discovering new places and new things that you've never seen before, or anywhere else."

Ghost Recon Breakpoint launches on PS4, Xbox One, and PC on October 4, and will be available on Stadia at launch. For more on Ghost Recon, check out our previous coverage.