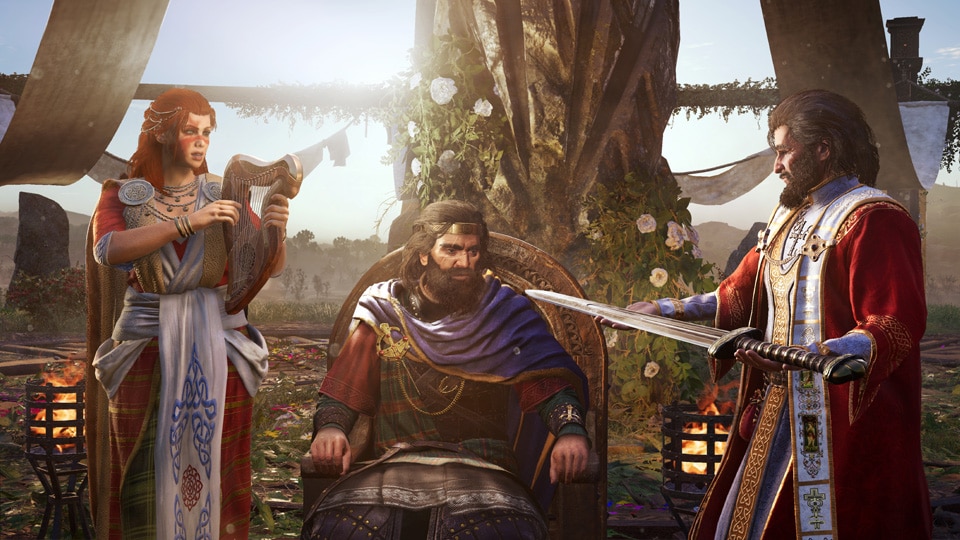 Assassin’s Creed Valhalla Wrath of the Druids – The Real History

Assassin’s Creed Valhalla’s first major expansion, Wrath of the Druids, is out on May 13 on all available platforms. Eivor’s latest journey takes them to shores of Ireland, where the newly-appointed High-King Flann Sinna seeks to unite four disparate regions under a single Irish banner. Along the way, Eivor will discover the secrets of an ancient druidic cult, encounter fearsome mythological creatures, and explore Ireland’s many mysteries.

A new land means new monasteries to raid, alliances to forge, enemies to fight, and skills to learn. New abilities let Eivor fire off smoke-bomb arrows to make a quick getaway or open up opportunities in combat, or summon Irish hounds to attack enemies. Of course, Eivor is more deadly than ever thanks to the addition of sickles as a new melee weapon type. In between battling mythical creatures and helping unite Ireland, Eivor will set up trading posts around the land to earn valuable rewards, help foster alliances, and build up Dublin’s commercial reach.

Wrath of the Druids is included as part of the Assassin’s Creed Valhalla Season Pass, and is available as a separate purchase. Before you jump in, why not learn a bit more about the real history of ninth-century Ireland and the people, places, and things that inspired Wrath of the Druids? 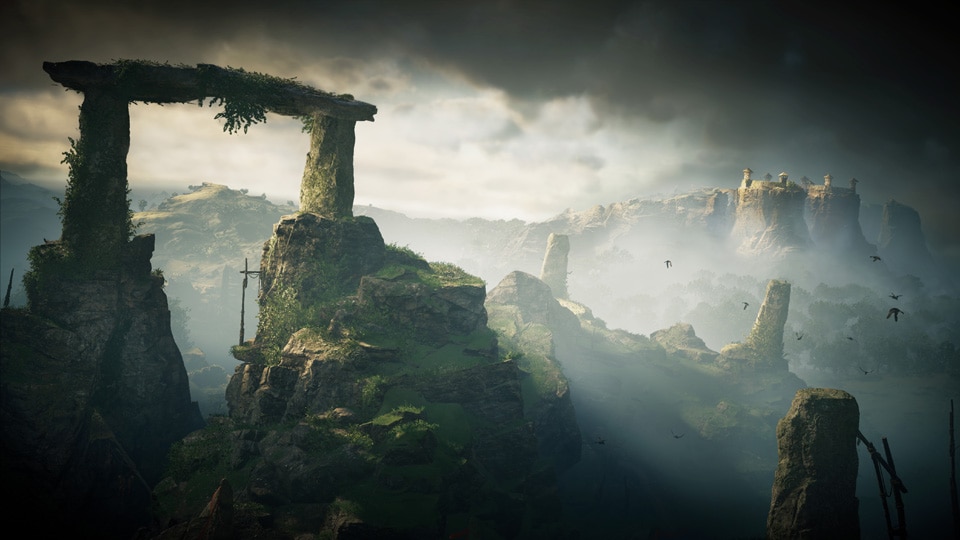 Early medieval Ireland was a collection of small kingdoms, all frequently at war with one another. High Kingship of Ireland, also know as Kingship of Tara, was a constant battle between northerners and southerners, with power changing hands between two branches of a dynastic family: the Northern Uí Néill and the Southern Uí Néill. When in power, northerners ruled from Ulster, while southerners ruled from the kingdom of Meath.

One thing that helped create some semblance of unity for the disparate kingdoms was the ninth-century invasion of the Danes, which caused many Christian Irish to unite against a common enemy. In 866, High-King Áed Finnliath led the Irish to successfully push the Vikings out of the northern region of Ulster, which resulted in the Irish fighting amongst themselves once again. 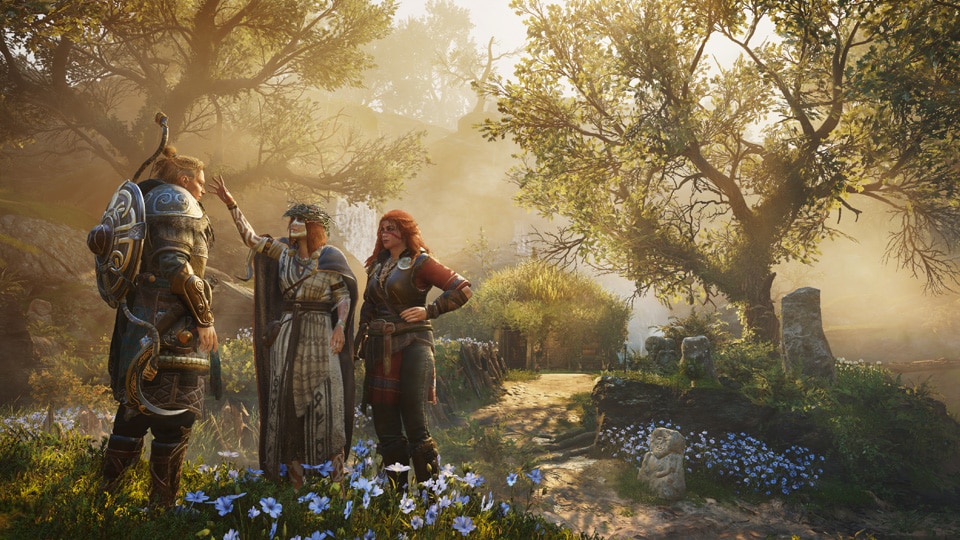 Flann Sinna’s father, Máel Sechnaill, represented the Southern Uí Néill as High-King of Ireland until his death in 862. At that point, High-Kingship passed to the northerners and Áed Finnliath, Flann’s first cousin, took up the mantle and married Flann’s mother, becoming his stepfather as well as his cousin. As unusual as it may sound today, marrying your predecessor’s widow was tradition at the time.

Flann wasn’t overly fond of his new stepfather, and as a result, the north and south were constantly at war with one another. Flann’s ascent to the throne of High-King was far from peaceful, as he murdered his second cousin – Donnchad mac Eochocain, the reigning king of Mide and head of the southern Ui Neill – to become king of Mide. When Áed Finnliath died in 879, Flann became Ireland’s new High-King. It’s here that Eivor enters the picture, helping Flann’s coronation go off without a hitch and aiding him in numerous battles.

While Flann’s predecessor was no friend of the Viking Danes, Flann was more than willing to work and fight side-by-side with them after they were driven south by Áed Finnliath. Those Dane allies were certainly helpful, as Flann’s 36-year reign was incredibly violent, with constant raids and attacks across Ireland. At one point, even his own sons rebelled against him. Flann eventually died in 916, and was succeeded by Niall Glúndub, the son of Áed Finnliath. 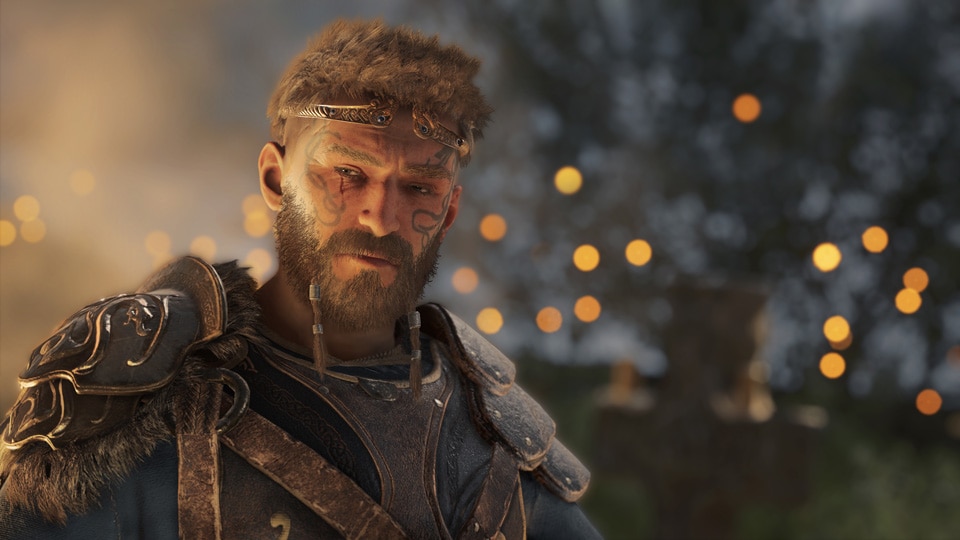 Players will be introduced to Bárid as Eivor’s cousin, a fellow Norseman, who is now king of Dublin. At the time, Dublin had been invaded and controlled by Vikings, not Irishmen. Bárid was the son of Imar, a Viking raider who founded the Uí Ímair dynasty and helped establish Dublin as a Norse settlement. Some scholars believe Imar and Ivar the Boneless to be the same person, but in Assassin’s Creed Valhalla they are two very different people.

Bárid had close ties with Áed Finnliath, which may be why Flann Sinna hesitates to trust him in Wrath of the Druids.

Wrath of the Druids portrays Sichfrith as Bárid’s son, but in reality, the two were brothers. Sichfrith did succeed his older brother, but his time as king of Dublin was mostly concerned with conflicts between different Viking clans: those who were allies with the Southern Uí Néill, and those who lived even further south. killed by his own kinsman in 888 and succeeded by his surviving brother, Sitriuc. 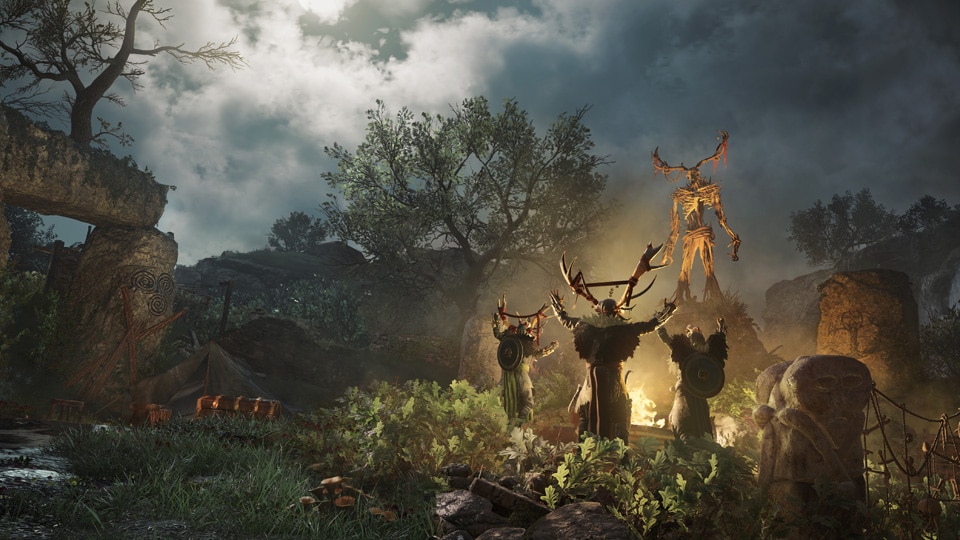 The Book of Kells

Early on in Wrath of the Druids, Eivor is tasked with retrieving the Book of Kells from a mysterious cult. In reality, the Book of Kells was an illuminated manuscript containing the four gospels of the New Testament in Latin. In Eivor’s time, it would’ve been only a few decades old and incredibly important to Ireland’s Christian population, including High-King Flann Sinna. It is considered a masterful example of western calligraphy, is regarded as one of Ireland’s finest national treasures, and gets its name from the Abbey of Kells, where it lived for centuries.

An ancient ceremonial site near Dublin, the Hill of Tara was the inauguration place for the High-Kings of Ireland, and is where Eivor meets Flann Sinna for the first time. The site contains monuments dating all the way back to the Neolithic Age, such as the Lia Fáil, or Stone of Destiny, a standing stone by which all coronations would take place under.

There’s still so much to learn about the history and mythology that inspired Wrath of the Druids, but you’ll have to discover that for yourself (check the in-game codex for more information) when Wrath of the Druids launches on May 13 on all available platforms. For more on Assassin’s Creed Valhalla, be sure to check out our previous coverage.