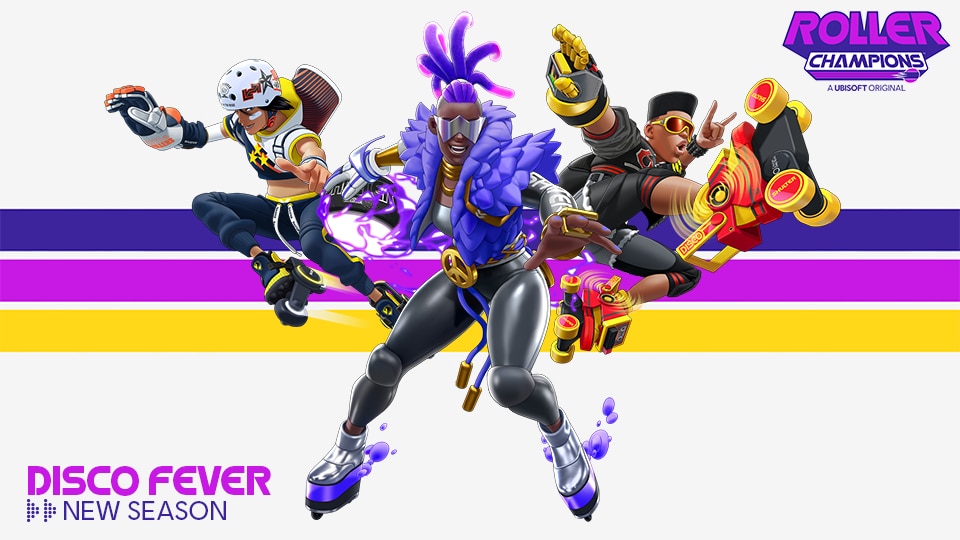 Quality-of-life updates include visual improvements that give players more visibility for when events are live, as well as a mailbox feature to gather all game notifications in one place. Arena 8, the new mode, changes up the level design with a figure eight-shaped rink. Jump into the skatepark to try the two new minigames: In Star Dash, you compete against others to catch stars shooting out of a disco ball in order to win fans and unlock rewards, and with Star Dash Supernova, you’ll need to dodge bombs while collecting stars.

To learn more about the new season, how it differs from kickoff season, and what players can get hyped about in Disco Fever, we spoke with Roller Champions Product Marketing Manager Stéphane Drapeau.

Roller Champions launched on May 25 with its Kickoff Season, aka Season Zero. What were the team’s goals in launching with a shorter season and not starting with Season One right out of the gate?

Stéphane Drapeau: Kickoff Season was the best way to kick things off (pun intended)! It included the core experience and features of Roller Champions. There are several exclusive items that were tied to that season and its theme and flavor. But as with any live game, a big part of our core is meant to evolve, and that’s what the sequence between Kickoff and Disco Fever allowed us to demonstrate in a significant way! This sequence allowed us to set the expectations early on for what to expect from Roller Champions as it progresses through its first live year.

Now that Kickoff Season is over, can you share some of the things you learned? What are some of the changes the team has made to the game since launch?

SD: Anytime you have players playing, you discover new things about a game. We’re no exception, even after our live phases! For one thing, we’ve learned how to improve and optimize the Roller experience between Kickoff and Disco Fever. The team’s top priority is to ensure a smooth experience for players; they’ve been working hard on ensuring that since day one, and will keep doing so moving forward. For another, we’ve been paying close attention to the ways Roller Champions is played by newcomers and top players alike. Balancing the core gameplay is very important to ensure that we can offer a fair competitive game for players and preserve a learning curve that shows Roller Champions’ depth without making it too easy or too hard to feel competent, while still looking forward to developing their skills.

What can players look forward to in Disco Fever? Are there any elements you are particularly excited about?

SD: One thing we’re definitely excited about is that first taste of the theme, from the splash screen welcoming players to the main menu – and, of course, the added songs to our playlist, which we hope they’ll sing along with! There are also the new maps that we’re releasing, which carry the theme for this season and will give players a new flavor that we’re excited for them to discover. Then, of course, there are the exotic features, like our time-limited mode for Disco Fever, called Arena 8, and our minigames in the skatepark, which will become available as we progress into the season. And how could I not mention that we’ve got the coolest items coming for Disco Fever, with a superstar that we absolutely love and embodies the disco vibe perfectly!

Can you share any insight into the team’s approach to designing upcoming seasons? What does the future of Roller Champions have in store?

SD: The team is juggling between the requests made by our community, the issues they raise, and the desires that they have for the future, as well as our own vision for how to make the game evolve. To say that these are always easy to juggle would be an overstatement, but we find striking the right balance to be key to Roller Champions’ ability to provide fun to players moving forward. For one thing, we can guarantee there are more themes and more game tweaks coming in the future, but for the other, that’s for our community to decide. We want to make sure Roller Champions caters to the needs of those who want more competitiveness, as we feel this is central to our game, but we also want to keep the experience fresh, which is what we believe we can achieve with our seasons and themes. At any rate, the future looks bright, and we’re excited to see it unfold!

To celebrate Disco Fever’s launch, all fans earned during the first weekend will be doubled for every player. Roller Champions is available now and free to play on PC through the Ubisoft Store and Epic Games Store, Switch, Xbox One, and PS4 (plus Xbox Series X|S and PS5 via backward compatibility), with Stadia, and Amazon Luna releases coming at a later date. Check out our video on 5 Things We Love About Roller Champions.