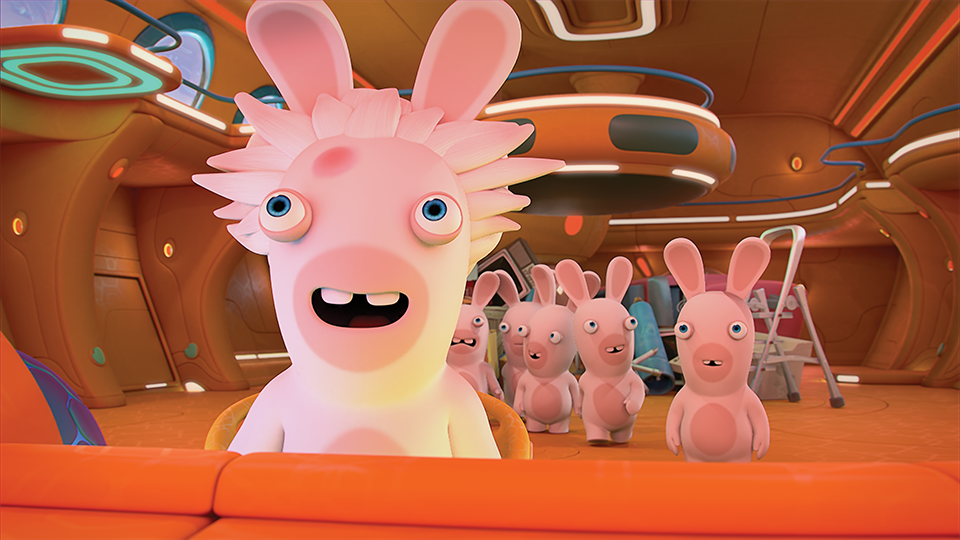 Ubisoft Animation Studio (UAS), the in-house studio of Ubisoft Film and Television dedicated to creating animated films and series, will soon adopt the open-source animation software Blender as its main digital content creation (DCC) tool. Additionally, Ubisoft will support its development by joining the Blender Development Fund as a Corporate Gold Member. To learn more about recent changes at UAS and why Ubisoft uses some open-source software, we spoke with Pierrot Jacquet, Head of Production at UAS.

Let's start with some background on Ubisoft Animation Studio. What is the studio's mission, and how has it evolved since its creation?

Pierrot Jacquet: Ubisoft Animation Studio was created in 2011 as part of Ubisoft Film and Television to support the creation of the Rabbids Invasion TV series. The team has succeeded in creating 4 seasons of a global hit from scratch, and we are now ready to take on the next phase.

At Ubisoft Film and Television our ambition is to build an independent production company with a distinctive voice inspired by Ubisoft's worlds. Players expect Ubisoft to deliver AAA games, and to live up to that, our studio has to deliver AAA animated series and films. To best accomplish our goal, we decided to rethink the foundations of the studio to boost creativity.

With this in mind, we created an incubator department to help bring new projects to life by giving creative and technological support to our directors and artists. It is a department with a very agile mindset that has the mission to explore new visual styles and creation tools that could help push the boundaries in animation.

How does shifting toward open source software support creativity within UAS?

PJ: Part of boosting creativity is implementing technological solutions to support the creators. We decided to transform a workflow centered on in-house software to a more agile development environment supported by open source and inner source solutions. This way, our research and development and pipeline teams could focus their energy on bringing innovative ideas to the table, while working closely with the creatives.

In that new workflow, Blender is replacing our in-house digital content creation tool. We will use it to produce short content with the incubator at first and start to use it on our upcoming shows in 2020.

What about Blender makes it the right tool for the job in this new studio configuration?

PJ: Blender was, for us, an obvious choice considering our big move: it is supported by a strong and engaged community, and is paired up with the vision carried by the Blender Foundation, making it one of the most rapidly evolving DCCs on the market.

On top of that, this is an open source project. It allows us to contribute to its development both by joining as a Corporate Member, and by sharing with the community some of the tools our dedicated Blender team will be developing. We love the idea that this mutual exchange between the foundation, the community, and our studio will benefit everyone in the end.

For those that may not know, Blender has been around for quite some time as open-source animation software. Why has Ubisoft chosen now to become a Corporate Gold Member?

PJ: We believe that Blender 2.8, which will be released in the coming days, is a game-changer for the CGI industry. Blender has been on Ubisoft's radar for a long time already, and in the past year, more and more of our artists have shown an interest in using it in production. The growth of our internal Blender community, as well as the innovations brought by 2.8 – e.g. a revamped UX, Grease Pencil, EEVEE real-time rendering – convinced us that this was the right time to bring support to our artists and productions that would like to add Blender to their toolkit. What better way to support that switch than donating to the Blender Foundation, so we can help Blender to continue to grow?

How does working with open-source tools balance out with in-house developed tools?

PJ: At Ubisoft Animation Studio, we will always have very specific needs, and in-house development is the most efficient way to serve these.

On the other hand, when we had our own DCC, we had to spend a significant amount of time to maintain and improve the core of the software; this was less time we could spend innovating. Working with open source solutions like Blender offers us more flexibility and frees some resources to focus on research and exploration of new ways and tools to create animated shows.

Our discussions with the Blender Foundation have shown us that our goals are aligned, making the open source collaboration the obvious choice.

How do you see Ubisoft expanding its support of open-source software in the future?

PJ: Up to now, Ubisoft tested the waters by open sourcing some in-house projects [such as Sharpmake], and forking existing open-source projects [such as Massgate]. We consider open source the best possible software development models available to us, and we are ready not only to invest but also to contribute to mature open-source software such as Blender, which is evolving rapidly at the speed of our industry.