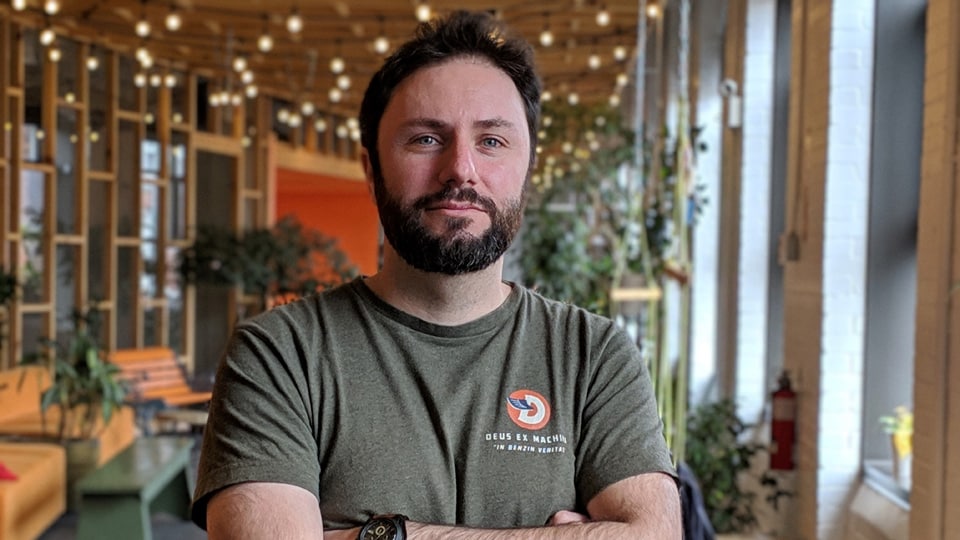 In his first seven years at Ubisoft, Gregory Fromenteau worked eight different games, including iconic franchises like Prince of Persia and Assassin's Creed. In his last five, he's worked on one: Rainbow Six Siege. The twelve-year veteran joined the Siege team as assistant art director in 2014 before becoming art director in 2015. He's overseen the visual direction of the game ever since.

Creating and supporting a live game presented unique challenges that Ubisoft hadn't encountered before. It's one thing to work on a game leading up to launch; it's another to continue that work for another four years. For Siege to succeed, Fromenteau and his team had to learn how to go from shipping a finished game to rolling out new content every few months. Since then, he's become an expert at motivating and leading his team through Siege's post-launch lifecycle. As part of the Empowering The Creators series, we spoke with Fromenteau about venturing into unknown waters, learning from mistakes, and adapting to a new style of production.

What responsibilities does an art director have?

Gregory Fromenteau: I'm the gatekeeper of the visual quality of the game. I try to share my vision for the game and ensure that everyone stays focused and aligned on that vision. I'm in charge of all the artistic elements in-game, especially the characters, environments, weapons, and gadgets. I also work closely with the presentation and animation art directors to make sure there's a good harmony between all of our elements.

It's my job to coordinate between all the different roles on our team and have them aligned to a specific vision. Working on the art team is a unique challenge in itself, because everyone has an opinion about art; it's easy to critique, while something like code can't be easily commented on. With art, it's easy to say, "why is this blue and not green?" In the end, it means I have to be good at compromising laughs.

How has your role changed from pre-launch to post-launch?

GF: We've completely changed the way we do things. We used to just make a box and ship it, and at Ubisoft I think we had gotten really good at making boxes. We used to ship and move on to the next game. The main difference now is that we started with this rough stone of a game five years ago and now we are chipping at it and polishing it into the diamond we have now. It has evolved in the sense that were always accountable for the decisions we make, and what we are doing can—and has to—evolve and change because of community feedback or even our own point of view. There's a sense of evolution to everything we do. We're aware that anything we do can change in the future.

Obviously, it's also very different now because there is no end in sight. We're still making new Operators and working on maps each and every season. Tech-wise, we don't have new tools; we have polishing tools, but we don't have new tech or new consoles. We have to be creative in a very small box and it can be challenging.

How has the philosophy of the art team changed since Siege launched?

GF: When we shipped back in 2015, we designed all the Operators as Counter Terrorist Units (CTUs); the design was more focused on the unit, rather than the individual Operators. We almost underestimated the Operators; they were "heroes," but we didn't realize that they were much more than characters and gadgets. Most of the identity of the Operators came from their CTUs and then their gadgets, but not them as characters. All that has changed, thanks in part to our community. When we saw the community creating stories around our characters, we realized that this was something that we could include as part of our game that would actually add to the experience.

Beginning last year, we started working on each character's background before we started working on their gameplay or gadget. We've now moved to "heroes" that we're designing and shipping with special looks, skills, and personalities. We want people to see a new Operator and want to know more about them.

"You can find and talk to anyone if you want to. I have testers, artists, and designers come up to me to suggest things all the time. I'm always happy to have multiple points of view on the work we're doing. That's a core philosophy at Ubisoft and it's not like that everywhere."

How do you keep yourself and your team motivated while working on a game for more than five years?

GT: It's interesting to see the constant reactions from the production floor and community about the game itself. Usually, when you ship a game, you get feedback but there's only so much you can do about it. Now, we can do something about it. If something needs changing, we can do it, and I think that really motivates us to push the quality of the game.

We're also just always trying to be better at what we do. I think if you look at the visual identity of the Operators we have in the game now, it's much more defined than what we launched with. It took us all this time to get to where we are and we had to learn a lot along the way.

The team also plays the game quite a bit, which is unheard of for me. Five years after launch, I'm still playing the game, and my coworkers are still playing the game for fun. I usually don't go back to games that I've worked on post-launch, but now we're all still playing it, enjoying it, and making critiques of our own work. Siege, as a live game, was a new thing for Ubisoft, so every day we're taking on a new challenge, because we need to develop new pipelines and figure out how to develop and produce live content. For me, I like challenges because they drive motivations, so I think the "live" factor is giving us an extra boost to be more creative with what we have.

With the way Siege's post-launch seasons are structured, your team has a mini-launch every three months. How have you learned how to work within that timeframe?

GF: We learned the hard way, through many mistakes laughs. I think we've gotten better each season. If you look at the first seasons in Year 1, we made a map, two Operators, ran internal tests, shipped it, and crossed our fingers that everything was fine. If you look at the way we work now, we deploy all the new season's content on our test server so that we can spot and fix bugs much more easily. We originally wanted to surprise people at launch, but if you want to surprise people, that means you can't test it properly. We went from 200 internal testers to thousands of live players testing our content. We're also much more flexible on our dates; if a feature that we originally planned to ship on one date isn't ready, we hold it until the next release, rather than launching it before its ready.

I think another big change has been dedicating our people to more specific tasks so they're not spread across too many tasks. We've created "cells" for Year 4, so now instead of having multiple teams working on multiple subjects, we have created task forces for each individual Operator, which include the concept artist, programmers, writer, and tester, who are solely dedicated to that Operator. The fact that they're dedicated to their one Operator means they can be more focused, which really allows us to be more efficient and cut down on bugs.

As someone who's in charge of the vision of Siege, how do you communicate that vision to your team and provide feedback to them to ensure the vision is upheld?

GF: When we kick-start a season, I create a brief for my team where I try to be extremely concise and precise with what I'm looking for. Usually it's just a bunch of words and pictures laughs. It's mostly keywords and key pictures meant to sell the mood and atmosphere of the season. It's really important to me that it's simple, so that everyone can understand it quickly and keep the document open while they're working for reference.

Each director does that for their own team, and obviously everything needs to fit together at the end, so all the directors are working together as well. That initial brief document is really our master guide to start the season, and any time something goes off track, we can return to the document to make sure we're staying focused on what we wanted.

Do you have an industry peer that you admire outside of Ubisoft?

GF: If I had to only pick one, I'd say Uncharted series Art Director Robh Ruppel. I used to follow him before he started at Naughty Dog, when he was a concept artist at Disney. When I bought the first Uncharted, I didn't realize he was the art director. That game was special to me; it was the first experience I had where I felt like I was experiencing an interactive movie, my family could just stop what they were doing and watch my play and still have fun.. The level of detail was inspirational, and showed the direction that I wanted games to go. That team was great at delivering a really high-quality experience that was consistent with the initial vision.

Now that you're in a leadership role, do you find that you picked up management techniques along the way?

GF: I learned a lot due to the fact that I did various jobs in the industry. I'm able to put myself into a lot of people's shoes and know exactly what their needs are, and so I know what we can do and what we can't. You have to make sure that you're making realistic asks; there may be times that you ask for 100% of something, and they're only able to deliver on 80% of it. And that's fine, but you need to make sure that 100% is possible.

Do you think Ubisoft has an overall leadership philosophy?

GF: After working at other companies, I definitely like the fact that Ubisoft has a familial feeling. I know that I can tell someone something without fear of being judged. People will listen to you here and are very accepting. If you have something to say, you can say it to anyone. You can find and talk to anyone if you want to. I have testers, artists, and designers come up to me to suggest things all the time. I'm always happy to have multiple points of view on the work we're doing. That's a core philosophy at Ubisoft and it's not like that everywhere.

For more interviews like this, check out our previous entry in the Empowering the Creators series and for additional news on Rainbow Six Siege, take a look at our previous coverage.