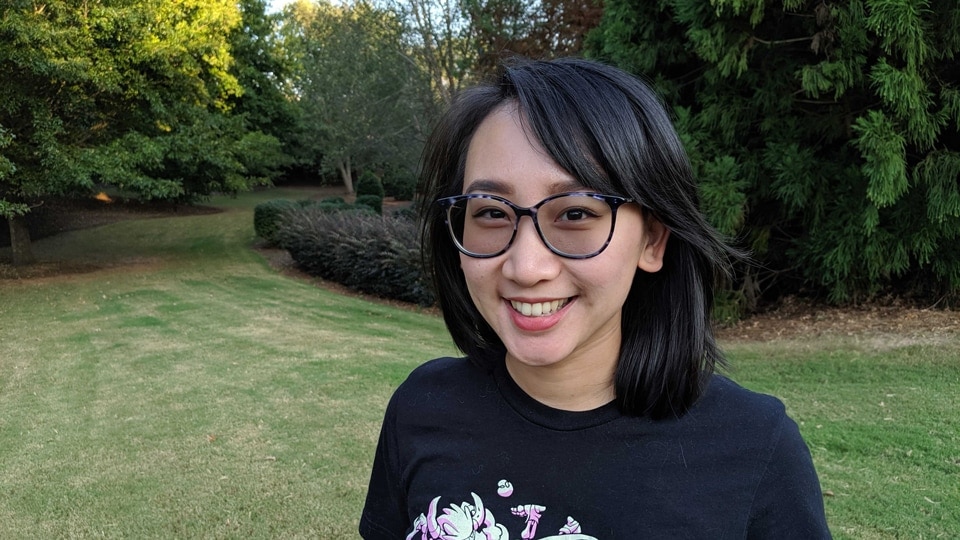 At Blue Mammoth Games, no one does just one thing. The relatively small studio behind Brawlhalla now operates a game with more than 30 million players, so its developers often have to wear many hats. This culture grows from the studio's indie roots, and it's one that Uyen-Anh Dang fits into perfectly. The theater arts major is used to juggling multiple jobs; after graduating college, Dang set out to become an actor in Austin, Texas while also working as a dog trainer and teacher. During this time, Dang and her friends found their way into the closed beta for the yet-to-be-released Brawlhalla. The crew fell in love with the game, and became active members in the fan community. Their involvement eventually caught the eyes of Blue Mammoth and set Dang on the path towards her role as an associate producer on Brawlhalla.

**How did you get involved with the Brawlhalla community? **

Uyen-Anh Dang: My significant other, Duc, our best friend, Sparky, and I loved the game so much that we sort of threw ourselves into the online community. We were looking to see what we could do to be a part of it. At the time, we saw that there really weren't many 2v2 tournaments, so the three of us decided to make a tournament organization. It started out small, but we created a 2v2 tournament with friendly fire on; at the time, the game didn't even have that option, so it was pretty wild. The games were technically free-for-alls, but we made the teams pick the same color options for their characters to differentiate teams. Funnily enough—and this is what I really love about Blue Mammoth—they really listened to the community, so soon after we had that tournament, the team added friendly fire to the game.

So you were already changing the game before you even worked at Blue Mammoth?

UD: Yeah! We were organizing tournaments. Duc and Sparky were at the forefront of it, casting them, while I ran production and coordination in the back. We did this whole production for years alongside Blue Mammoth and were deeply rooted in the community. After three years, Duc and I decided to pursue full-time jobs at Blue Mammoth when there were some openings. We had a conversation about whether we were ready to take that jump, but we did, and this is pretty much where we landed. It was a very non-traditional route into this industry, and I never thought it was something that I would do, but I'm so happy that I did.

**How exactly did you transition from being a community member to being an employee? **

UD: It all really started when we began running tournaments and getting popular with the community. The first time we ever met the devs was at RTX 2016. We were just so happy to meet them and help them out. We were just volunteering our time to help them run their booth, and I feel like that's when the "casual interview" process began [laughs]. Any time they were in Texas, we would try to go out and volunteer our time to help or hang out with them because we loved the game so much. When it came time to seriously apply for a job, I contacted Matt [Woomer, founder of Blue Mammoth] and it just went from there.

**What do you do as an associate producer? **

UD: Well, we all wear a lot of hats here. For me, specifically, I mainly focus on anything pre-production for our patch updates. So that's coordinating with the content team and the programmers, and figuring out what's going into these next patches. Then during production, I track and manage all the different assets being made. What's really fun is that not only am I coordinating, I'm getting a chance to actually implement some of these things into the game. I get my hands on the design aspects as well. I've dabbled a little in technical art with Blue Mammoth, so I've made some of our minor icons you see in our game recently, which has been a lot of fun. I get to do a lot of stuff here, but my main role is coordinating pre-production.

**Did you feel like there were growing pains when you first started, since you didn't have a background in game development? **

UD: Honestly, no [laughs]. I've learned so many things along the way before jumping into the industry. I know I had an untraditional route, but I wouldn't take anything back, because all my jobs—acting, dog training, teaching—have all taught me so much that I feel correlates with what I do now. As a teacher and dog trainer, I was coordinating, managing, and organizing regional classes. As an actor, I was learning how to work and collaborate with others, while being flexible with whatever comes up. I think the only growing pains I had was figuring out terminology, but even that wasn't that bad, because everyone here is extremely helpful. If I had a question about something, I always had help. It didn't take me long to catch up and get going; I felt like I fit in right away, and it was all such a smooth transition. It really helped that I was already part of the community.

**At most Ubisoft development studios, folks have very specialized roles. Why do you think Blue Mammoth encourages so much job flexibility? **

UD: I think being able to wear multiple hats works for us, because it really lets people explore and expand different interests they have. I like being an associate producer, but I appreciate that I was able to talk to our lead technical artist and learn a few things from them. It works for us because it really just motivates and inspires us to pursue our own interests, which helps make Brawlhalla better overall in the end.

Does Blue Mammoth still feel like an indie studio?

UD: Yeah, totally. Everyone is very open and welcoming. Being able to collaborate with everyone the way we can makes it still feel very indie. I really like that feeling and appreciate the openness because it makes you feel supported and welcome from the beginning.

What do you think it was about Brawlhalla that made you such a fan?

UD: I've actually never been the biggest fighting-game fan out there. I like my RPGs, I like my FPSes, and fighting games aren't normally the things I gravitate towards. I'm not even really into platformers, but when it came to Brawlhalla, it was so easy to just jump in and pick up and learn. I really appreciate that anyone can pick it up and play and have a good time with it. It made me feel so amazing, even if I wasn't that skilled at the beginning. And I love how there are so many characters, and the weapon system felt so different.

As I played the game and got more involved, I found the community to be really encouraging. That's what I think is so unique about Brawlhalla: we're so in touch with our community. The top players were more than happy to play with me and teach me things when I was first starting out, and it just made me want to play more and learn more.

**Speaking of all the characters, Brawlhalla has such a diverse cast of Legends. Is it a conscious decision to have a lot of representation in the playable characters? **

UD: Yeah, it's a conscious decision and having a diverse studio and community helps. We definitely collaborate here and listen to what our community is saying. We're able to have those diverse conversations and discussions in the studio about, "what if we did a Legend like this, or like that?" We have a Legend, Zariel, who's an angel that doesn't identify as a particular gender. I think because we collaborate so openly, we're able to have these conversations about diversity, and what we want our Legends to be.

**What advice would you give to someone who wants to get into the game industry? **

UD: Keep doing what you're doing. Whatever job you're doing now, there are skills and things you can learn from it. Then, when you're ready to dive into the game industry, just go for it. Whatever the position, just go for it. After being part of the community for over three years, I always wondered how I could be a part of the industry and this game. I had all these fears, and I wish I could've told my past self to just do it and take the jump, so that's what I would tell someone else. But make sure you take the skills you learned from whatever you're doing now.