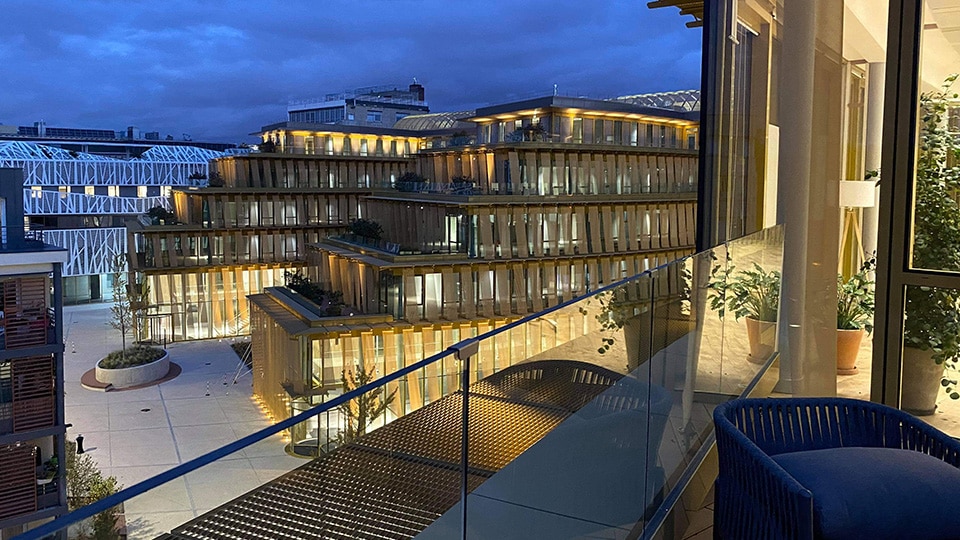 Ubisoft’s new global headquarters, in a building called Floresco, recently opened its doors. Situated in the Paris suburb of Saint-Mandé, the building is just a stone’s throw from the Bois de Vincennes – the French capital’s largest public park – and stands out with three ochre glass-and-metal wings that extend onto a stone plaza and feature rooftop terraces. 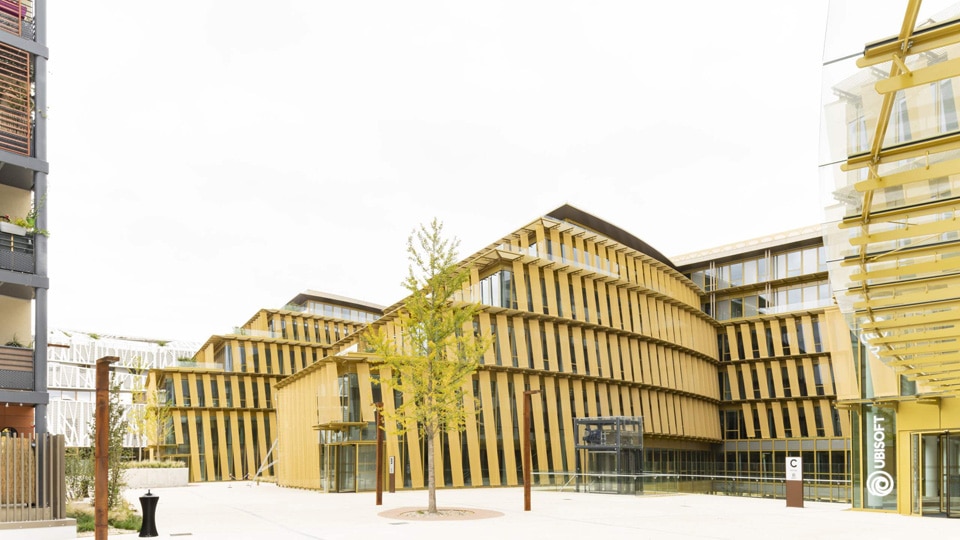 In addition to implementing new spaces for creativity, including lounges, play zones, and modular project rooms, the team behind the move took up the challenge of designing an eco-friendly environment. Let’s take a tour of some of the initiatives and features that ensure Floresco lives up to its name, which translates to “I bloom” in Latin.

An Ecological Mindset Requested by Teams

Marie Simonian, workplace experience manager at Ubisoft, explains that the Floresco project launched back in 2018, with workshops involving team members who work at Ubisoft’s HQ. “Thanks to these workshops, we were able to outline expectations, especially in terms of the building’s ecological impact. Selective waste sorting, reusable dishware, bulk consumption, and the creation of a vegetable garden were top requests from team members,” she said.

A cafeteria – something that the previous headquarters didn’t have – was soon brought up for discussion. “The main criteria when choosing our service provider were the quality and origins of the products, as we wanted to make sure that at least 80% of the food was local,” Simonian explained. “Considering that over 50% of the team members who answered our survey are flexitarian, vegetarian or vegan, it was important to cater to a variety of diets.” 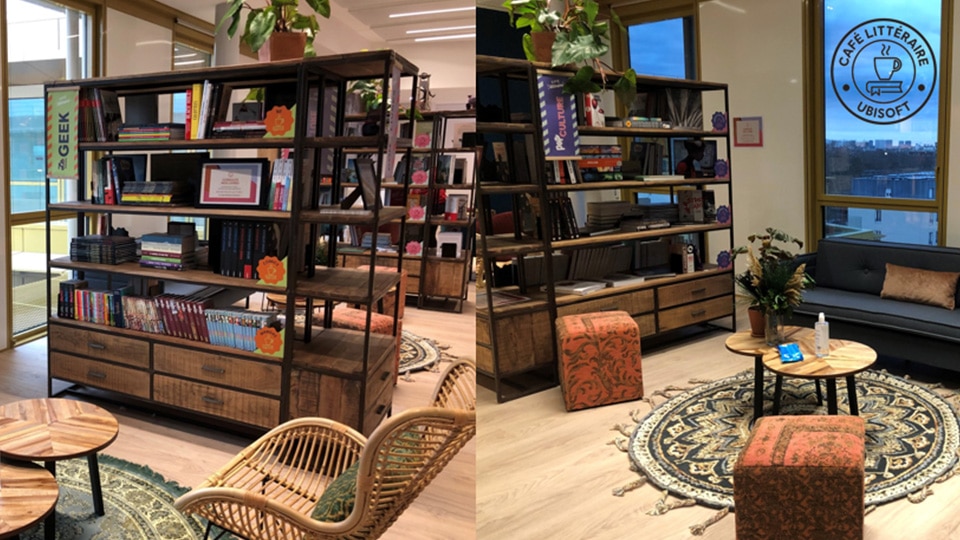 Simonian’s team also decided to rethink how green the interior spaces would be. “The idea was to limit the use of plastic plant pots, cut plants, and hydroponic crops. At Floresco, most of the interior plants will simply grow freely alongside our teams!”

Since maintaining an office building involves processing a large amount of waste, Workplace & Experience Operations director Laurie Pigeot-Besse points out that a new building was an opportunity to set up a revamped recycling system for paper, cardboard, aluminum cans, plastic, and glass bottles. “Thanks to simplified signage, team members can now sort their waste easily, and our partner in charge of collecting waste allows us to track how it is treated and processed.” Even the bins are made of 40% recycled PET plastic.

When it comes to partners, Pigeot-Besse indicates that “whether it is for material or consumable goods, all bids for suppliers related to Floresco now explicitly include environmental requirements. Regarding office cleaning, for instance, we are particularly attentive to the products that are used.” 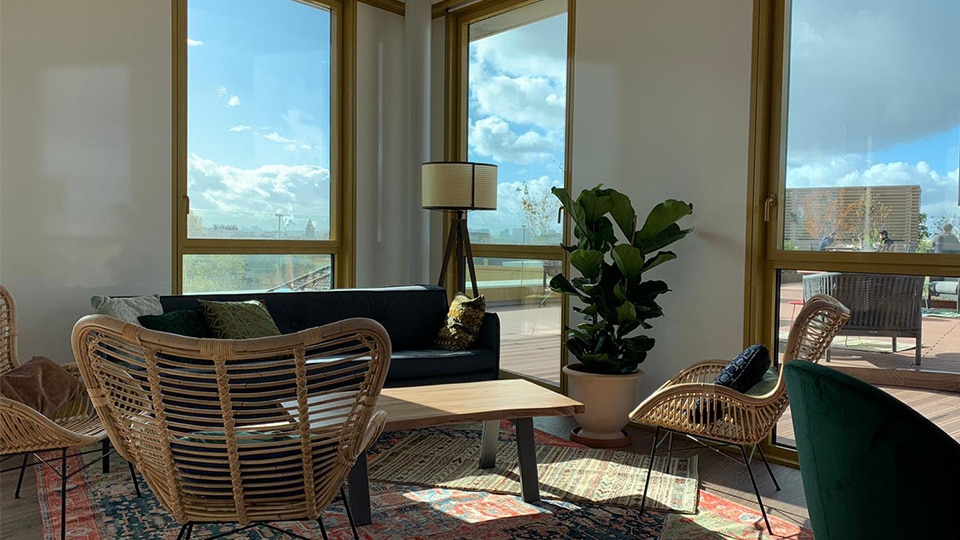 The Floresco team also thought of ways to reduce waste by choosing partners that offer take-away lunches in reusable containers that team members can bring back. “This has the double advantage of reducing the use of single-use dishware as much as possible, as well as limiting the need for deliveries,” Pigeot-Bisset adds. “As for the bio-waste from the cafeteria, it is entirely recycled.”

Real Estate Manager of Operations Jean-Baptiste Lacheteau shares how Floresco actively works to reduce electricity consumption: “The glass facades, which cover nearly 80% of the complex, maximize the use of natural light and limit the need for artificial lighting. Moreover, all bulbs are low-energy LEDs, controlled by a single program and a probe that adjusts the lighting in real time, and allows us to program schedules throughout the year. Unless otherwise requested, all lights are turned off from 10PM to 7AM.” 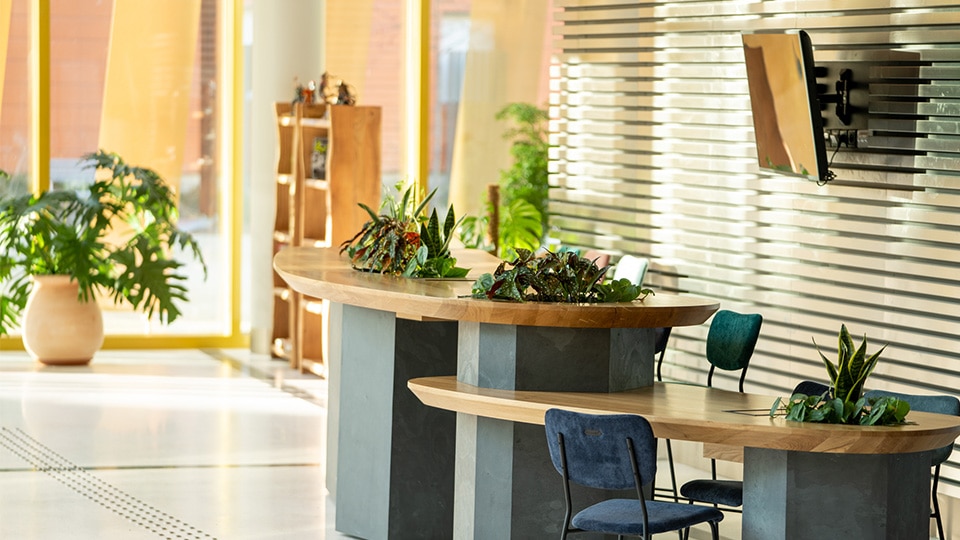 Floresco does not rely on ventilation heating, but on a more environmentally friendly solution: radiant heating. “The concrete slab can be heated at night, giving back the energy to the building during the day. It is a much more pleasant heat, with a much lower energy consumption,” Lacheteau adds.

While the Floresco building is currently open, not all services are available and Ubisoft’s HR recommend that team members in France continue to work remotely as much as possible to guarantee their safety. “The whole team behind the Floresco project is eager for Ubisoft team members to discover their new office once the situation improves and all amenities can safely open,” Simonian says. 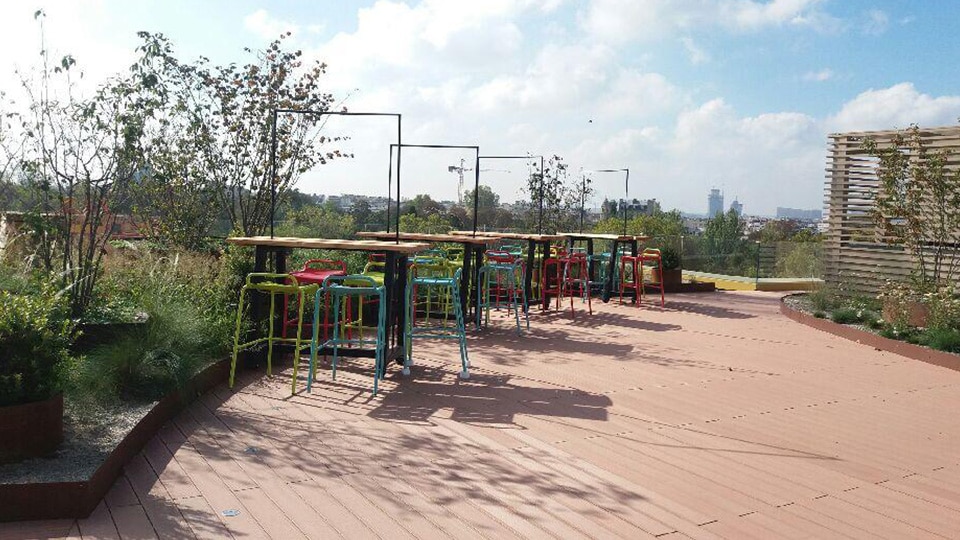 For more news from inside Ubisoft, including its ongoing environmental commitments, check out our previous coverage.

A French version of this article was originally featured on Ubisoft Stories.