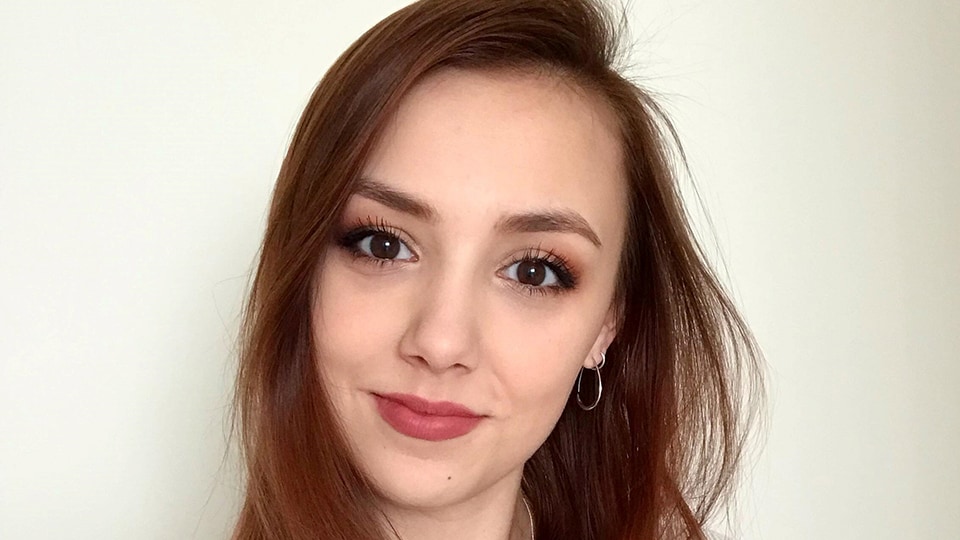 When Ellie Rhodes was growing up in England, she wanted to be everything under the sun – a dancer, an artist, a professional horse rider, everything. But throughout it all, there was one constant, videogames. Those other interests faded by the time Rhodes left college, but her passion for videogames led her to join various online gaming communities, take a job in game retail, start her own blog, and eventually attend and work at various gaming conventions.

Each endeavor helped her to build up a network within the industry until she finally met developers who worked for Oddworld Inhabitants. Rhodes's love of the Oddworld games combined with her experience on social media led her to a position as a community manager at Oddworld. Eventually, Rhodes became a full-time marketing manager at Team17, where she gained wealth of experience in nearly every aspect of marketing.

After a year at Team17, Rhodes left England for Quebec City to live with her now-husband who works as a writer at Ubisoft Quebec. Luckily for Rhodes, her dream job opened up, and before long she was working as product manager on Assassin's Creed Odyssey, and now Gods & Monsters.

What exactly does a product manager do?

Ellie Rhodes: My favorite way to describe the role of a product manager is to say that we're like the "marketing police." Ubisoft has all these teams around the world and we work with so many different studios and offices and so there needs to be someone that makes sure that the footage, trailers, screenshots, and game communication are all conveying the right messages and portraying the game accurately.

Essentially, my job is to know the game inside and out so that when people come to me with requests, I can help them directly or communicate with the development team to get them what they need. Product marketers are sort of the go-between for all the different global teams, so they can have an almost-direct connection with the development team while they focus on creating their game.

ER: I think there's probably two parts. I'd say the first one is knowing everything. It feels like a real privilege to know so much about something, for all the different teams to let us in on their little secrets with their production plans. It's really cool just having that bank of knowledge and being able to provide that information to different people when needed.

The second thing is the connections we create with different people. My job has always been about connecting the dev team to the community and vice versa. As much as we can, we want to try to hear the community, hear their feedback, and reasonably attempt to implement it. We try to listen to our community as much as possible, and I like to make sure the dev team hears them. That even goes to fan art, fanfiction, and cosplay. I actually collated those for Odyssey for the first six months or so after launch, and sent them to our communications team so they could be shared across the studio and the devs could see just how happy fans were with the game. That was a big deal to me, that they got to see that. The other side of it is that we want the fans to know that the devs are listening by giving back what they are asking for.

You seem to be very involved in the Assassin's Creed community, what made you want to make that connection with the players?

ER: It's something that's always been very close to my heart. Having the ability to connect with the community and specific community members. I count some of them among my friends because we've met at various events in real life and have had long conversations together where we talk about much more than just Assassin's Creed. I love seeing people's passion, because my job has always been about creating passion in other people. The fact that I'm allowed to do that in my current position is great.

You're very vocal on social media about physical health, mental health, and general positivity. What inspired that level of openness and honesty?

ER: I've been through a lot in my past and am still going through a lot. I've come out of tough situations so many times now and I've been stronger for it, most of the time. I think discussing things that can cause people to spiral, or fall into depression, or have mental health issues is important because I've had those things happen to me and I want to talk about them to make sure that people know they're not alone.

I feel like I'm in a very fortunate position where I have a support network that is caring enough that I can discuss these things openly, so why shouldn't I? Because me speaking out about it will help people realize that you can get out the other side and that it does get better, regardless of the situation. I might not be able to help in any way other than just listening, but sometimes that's enough. Speaking out about it on Twitter is something I've been quite conscious about, and something that I've wanted to do more as I've gained more of a following and my words can reach more people.

I like to draw attention to these things outside of special occasions like Mental Health Week. I want to talk about it as an everyday problem. Maybe I had a panic attack one day because I couldn't find the right clothes to wear in the morning and I ended up crying on the floor in my bedroom because I couldn't find the t-shirt I wanted, and that's perfectly normal when you have anxiety. But, I'm also a functioning human being so it's ok to be like that sometimes. That's what I want people to see.

Beyond that, there's other medical issues regarding fertility that I've discussed on Twitter, that's a less common problem, but is more common than people think. It's tied to mental health because it can often be the cause of mental health issues and can feel like a soul-crushing medical condition to have and can impact such a large amount of your life. It often causes depression and anxiety. I can't stress how important it is to talk about these things to make them feel more normal. There's a whole range of people that have these experiences that don't talk about them because it's too painful and people need to know that these situations can happen to anyone.

Was that something that helped you while you were going through your diagnosis?

ER: It's not something I really had when I was going through things. I was undergoing medical tests and treatments for three years and was officially diagnosed with a fairly severe case of poly cystic ovarian syndrome just before I turned 20. I was essentially told at 19 that I might be completely infertile. If anything, I was almost relieved because now I at least had a name for this thing that I could now fight. I've always been determined that it won't beat me in any way. I want to comfort people and help them realize that it's not the end of the world. I don't think people are aware of conditions surrounding fertility issues in general because it's "icky" and "gross" and maybe they don't want kids. People can struggle to be compassionate and empathetic in those situations if it's not something that they've experienced, but it's more common than people think.

What role have videogames played for you while you've been going through this process?

ER: I've always treated games as escapism. If I can get sucked into a game, I can lose myself in it for days. When I finally got around to playing Bloodborne I played it for two weeks straight, putting all my spare time into it. It completely sucked me into the world and that just takes everything else away. Even now, if I've had a hard day at work, I'll load something up, whether it's a Souls game, Stardew Valley, Red Dead Redemption 2, just something to take my mind off everything. I make the effort to take that time to just rid my brain of everything that's been going on so I can go sit on my farm and grow turnips and milk my cows. It's my form of escapism.

It seems like you've learned a lot from your life experiences; if you could go back and tell yourself anything, what would you say?

ER: I would probably tell myself to be more confident because that held me back a lot. Talk to people at events, put your name out there, shout about what you're passionate about, be yourself vibrantly and brilliantly, and don't let anyone tell you to quiet down. It's something I think a lot of people on the edge of the industry struggle with. It can be easy to be afraid to talk to someone because you see them as an industry star, but then you speak to them and they're just normal people who are excited about games just like you are. Ultimately, being human towards them is going to make the best impression and build the best connection between you.

I'm a big advocate for getting not just women into the industry, but getting anyone into the industry. I know it can be really difficult for women and minorities to break into these spaces in the first place and the most sound piece of advice I could give is to just keep going, keep trying. If you give up, you're letting the other people have more of a chance because it's those that can fight for the longest that get their foot in the door. Be confident, go to events, meet devs, make contacts, and be your human, passionate self while doing it. If games are what you love, show that to people.