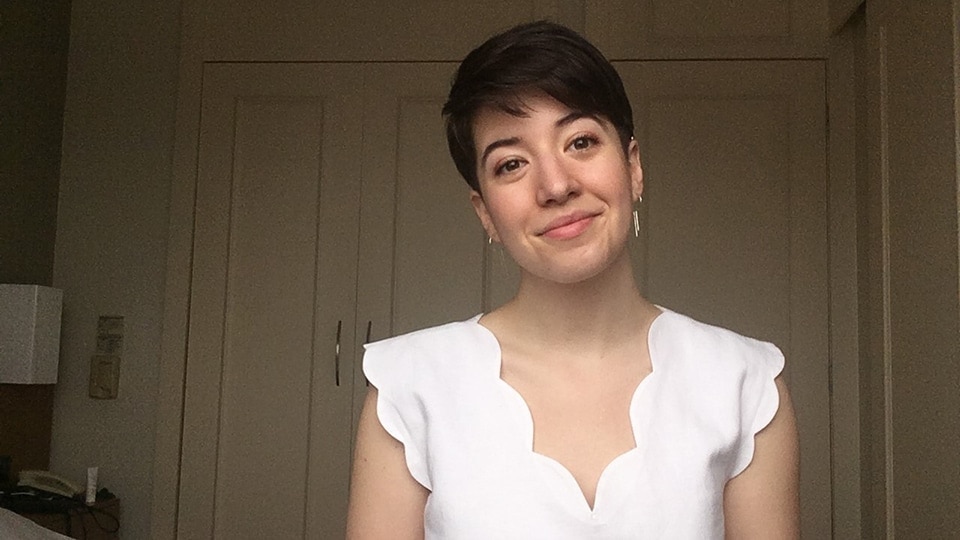 Growing up as a theater student in Toronto, Olivia Alexander was a regular on stage. By the time she left high school, however, she realized that her passion lay more in storytelling than acting. Alexander chose Concordia University in Montreal for its strong writing program, knowing nothing of the school's, or city's, affiliation with videogames. In her second year, she began taking courses focused on game design, and realized that her passions for writing and videogames could work together.

While at Concordia, Alexander joined a game-writing incubator at Montreal-based Pixelles, a non-profit initiative committed to helping more women make and change games. There, she developed a portfolio she could use to apply to game-writing jobs. Through Pixelles, she learned of an internship opportunity at Ubisoft Quebec. She applied, and a week later became a writing intern working on Assassin's Creed Odyssey under Melissa MacCoubrey. Today, Alexander is a scriptwriter and narrative designer at Ubisoft Montreal, working on Far Cry 5 and Far Cry New Dawn.

What has that experience been like for you working on major titles like Assassin's Creed Odyssey, Far Cry 5, and Far Cry New Dawn?

Olivia Alexander: It's been a really fun journey, with a lot of change in a short time. When I first began working in Quebec City, and early on in Montreal, it was very surreal. For a long time, I didn't think I deserved it. I had sort of imposter syndrome, but I've recently gotten over it, because [Far Cry New Dawn] is something that I've worked on for a while and can talk about definitively.

Early on in my career, I felt like it was just luck. I just fell into it, because I grew up with a certain degree of privilege. Then, someone pointed out to me, "you also made your own luck." And I realized that I did go to the incubator; I did take these classes; I did apply to attend GDC; I did network and look for opportunities to get here. There was hard work to get to where I am. I know my background makes sure that my experience is far from universal, but with my privilege, I am able to help ensure that other people take their own seat at the table.

When my contract was up at Ubisoft Quebec, I pursued the job at Ubisoft Montreal. Working on Far Cry was very different work than writing for Assassin's Creed Odyssey. It taught me the value of verisimilitude in an open world. It taught me a lot about efficiency in writing, you want people to say something significant and funny in the space of half a tweet [laughs].

You only worked on Assassin's Creed Odyssey and Far Cry 5 for part of their development processes. What was it like working on Far Cry New Dawn from the beginning?

OA: I was really excited to work on something from start to finish. It takes a village to raise a game [laughs]. There's a lot of ownership; things get passed around all the time, things get edited all the time. You can't really be precious with anything, because it almost always changes. New Dawn has been really fun, because I've felt like I've had a lot of agency. I had a lot to do with the conceptualization and feel of the Highwaymen. From the very beginning, I was saying, "everyone loves our villains so much, we should have this one be a woman." We are living in the start of a golden age, where we have these really great, intimidating female villains in our lives like Hela and GLaDOS, these really daunting female villains so I'm glad that was something that was successfully carried up the chain.

What is the role of a scriptwriter and narrative designer?

OA: I write dialogue, characters, and questlines. It's a job that involves a lot of left brain and right brain work, because any writer worth their salt in this industry needs to be able to know how a level designer is thinking; they need to know what tools are in the game engine's arsenal that can be used and exhibited. You need to know what boundaries you can push, and what's not within the scope of budget and mechanical ability.

How does your job change throughout the development process of a game?

OA: Over the years, writing in games has definitely changed, and I think you can tell that in certain old games. It feels like someone put dialogue onto a quest that already existed, or sometimes you can tell that the writing was there first. More and more these days, they're happening at the same time. I think the best games have the mutual respect between ludology and narratology, and that both aspects are being developed at the same time.

When I was on Assassin's Creed Odyssey, we intentionally checkerboarded our desks so that writers were sitting next to level designers. So, if a writer had an idea, they could lean over to run it past the level designer, and vice versa. They were developed together, rather than happening independently.

What's your favorite aspect of your job?

"One of the ways I think we can normalize women in any roles is by showing that they can be bad – that just like any good villain, they can believe they're doing the right thing, and that doing bad things to get there is OK."

Why did you want to see a female villain in Far Cry New Dawn?

OA: I had been thinking a lot about villains and antiheroes, and both of these things are wrapped in the idea that in fiction, someone can do reprehensible things and still be liked, still be empathized with. And I realized it's because these people are still being seen as people, they're still seen as human beings. I think frequently, media has conditioned viewers that when they see a female character, they need to see them as female before they're seen as a person. One of the ways I think we can normalize women in any roles is by showing that they can be bad – that just like any good villain, they can believe they're doing the right thing, and that doing bad things to get there is OK.

It's the idea of being a "post-anything" kind of world. We're not in a post-racial, post-gender world right now, which is why I think some people will disagree with me when I say that it can be empowering in certain situations in fiction to just let someone be bad. It allows them to be more than just a demographic, more than a woman and the historic pigeon-holing that comes with that. It allows them to be a fully realized, complex human being.

At what point did you feel that it was important for the villains to not only be women, but black women?

OA: We wrote The Twins and had an open casting call. We auditioned people from all backgrounds to voice The Twins, and no one held a candle to Cara Ricketts and Leslie Miller. They both had such energy and charisma that they carried through to our image of The Twins. I'm really glad that we have Cara and Leslie playing them; I was talking to them a lot, and they really understand the characters' complexities backwards and forwards, and portray them really well.

What makes a good villain? Who are some of your favorite villains?

OA: I really like GLaDOS in Portal. She's relentlessly confident and cruel. Catra from She-Ra is tragic, she's a villain I want the best for, but she just can't get there. I thought Hela from Thor: Ragnarok was portrayed with such gravitas. Killmonger from Black Panther was so great. You had a villain that outlined the systemic, historic, colonial oppression in a way that everyone in the audience could sympathize with. He's fantastic.

If there's a villain that you can think in complex ways about – how you can either stop them from doing something, help them not be who they are, or maybe even redeem them – then it's a good villain. Zuko from Avatar: The Last Airbender is a great villain for that reason. He is insufferable at the beginning, but by the end, you're rooting for him so hard, and you understand where he's coming from, and the abuse and pressure he's had to endure.

What do you know now that you wish you'd known when you started?

OA: It's so important to put people before projects – but at the same time, don't expect too much on a personal level from your coworkers outside of work. To be able to be in a community and writers group that supports you, and understands your needs and mental health, is invaluable; stay there as long as you can, and as long as you like the work. Don't chase something because it has a shinier label. Trust other people, and don't think they have it out for you. Be smart, of course, but being defensive all the time can drain you. Trust people at their word, at least some of the time.

I think I've learned a lot about how to conduct myself. I think the advice I'd give myself is to calm down and know yourself a bit better before you try to see your reflection in other people.

What do you want to do in five or 10 years? What are your goals?

OA: Most immediately, I'd like to be a lead writer, because it still involves a lot of creative work and collaboration. I think it would be really fulfilling for me. I'm still focusing on my own work, but to observe and help other people with theirs is something I'd love to do. I'd absolutely love to be a narrative or creative director as some point, but like I said before, the people you're working with matter more than any shiny title.

For more interviews like this, check out our past entries in the Women of Ubisoft series.