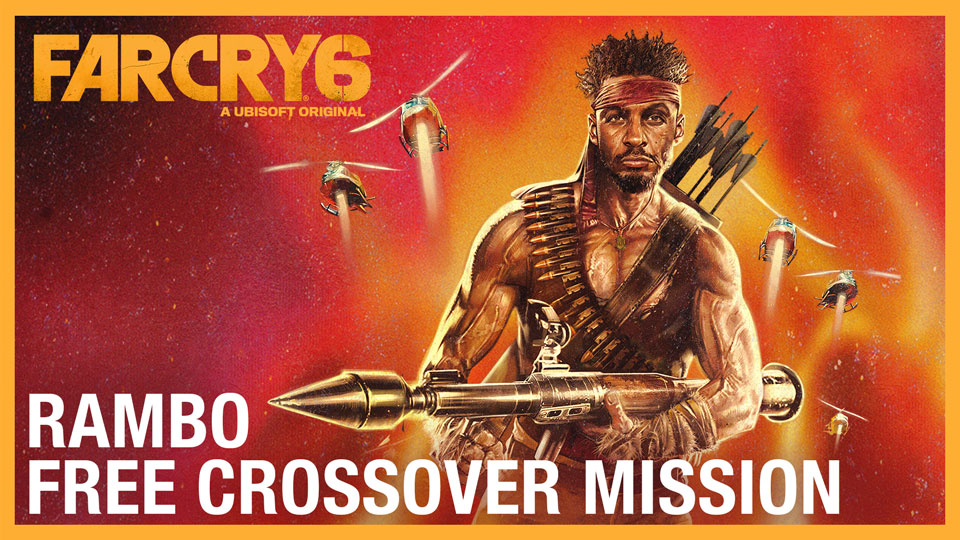 Far Cry 6 is serving up more guerrilla content for its Yaran rebels hungry for 80’s-style carnage. A new mission, dubbed “All the Blood,” pays homage to the first three movies in the Rambo franchise. Ubisoft partnered with STUDIOCANAL, which owns the rights to Rambo I-III, to make the crossover event happen. The mission is available now and free to download for all who own a copy of Far Cry 6.

“All the Blood” centers around a Rambo superfan on a mission of revenge against the Yaran military. Players can team up with him in an action-packed quest with bloody stunts befitting any Rambo-inspired operation. Completing the mission will reward players with the Vengeance Bow, a ranged weapon with an explosive effect on its targets. Once unlocked, the Vengeance Bow will be available to use permanently within the main game. In addition to the new gameplay content, Far Cry 6 is offering the Rambo Bundle for purchase, which will give players Rambo-inspired gear, weapons, and a vehicle. To coincide with the launch, select editions of Far Cry 6 are currently discounted up to 40% as part of the Ubisoft Store Lunar New Year sale. Later this week, the Far Cry 6 Season Pass will be 25% off.

Far Cry 6 is available on Xbox Series X|S, Xbox One, PS5, PS4, and PC. The game is also available with a subscription to Ubisoft+, Stadia, and Amazon Luna. For more information on the game, check out our previous Far Cry 6 coverage.