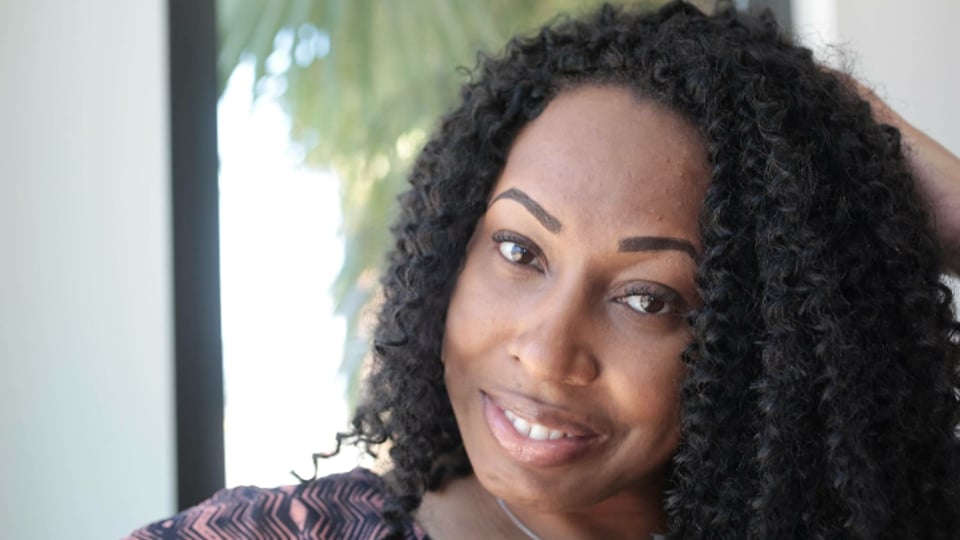 Few people at Ubisoft San Francisco are better-known than LaQuoia Gibson. The 12-year veteran has worked as a channel marketing temp, receptionist, shipping administrator, and facilities administrator. From greeting people when they arrive to fixing their desks when they break, Gibson's work has affected nearly every employee at Ubisoft SF, whether they know it or not. Following nearly a year of studying and training, Gibson recently made the transition from working on the facilities team to working on the brand marketing team, and is now a brand project manager on Just Dance.

Born and raised in Oakland, California, Gibson attended UC Davis, where she studied communications, English, and African American studies. Following her graduation in 2005, she immediately joined Ubisoft San Francisco. After her time working in facilities, Gibson found herself looking for a way to utilize her degree and find a career she was passionate about, which ultimately led her to the project management team.

What made you want to transition from the facilities team to the marketing team?

LaQuoia Gibson: I had started to think, "what do I want to do for my career?" I was accepting these new roles and transitions, and was starting to realize that it wasn't my goal. I looked around in other departments here to see where I could fit, and I found that I really like working in events. I volunteered to help their team out, but the direction they were going, and the help they needed, I wasn't qualified to give.

Then I had to step back and say, "what do you really want to do?" I wanted to be able to use my degree, and I love Ubisoft, so I wanted to stay here. That's when I decided to keep looking around the company, and eventually found the project manager position. I spoke to a couple people in the department to learn more about the role. Once they ran me through everything they do, I realized it was a job I wanted to do.

From there, I spoke with my boss, and he was willing to let me shadow a brand project manager for about four or five months to gain a better understand of the role. I applied for the job in January, started the job in March, and launched my first game, Just Dance 2019, this past October. It was a lot of work, and completely different from what I was doing on the facilities team.

It seems like a radical career change. Do you feel happier in your new role?

LG: Yes. It's a career change for the better. For me, facilities wasn't where I saw myself building a career. I felt I had also reached a ceiling where I wasn't going to challenge myself anymore or learn something new. I wasn't feeling satisfied, and I had become too comfortable with where I was.

I started this new role in March, and I actually love what I do. It's something different every day. Facilities was nice, because I was able to work with everyone, I got to know everyone at the company. I liked that, because I'm introverted, and it helped me become more sociable.

Do you feel like getting to know everyone helped you make the transition?

LG: Absolutely. I was still nervous, because I was interviewing for a new job, but everyone I met totally calmed me down. They were like, "LaQuoia, what are you nervous about? We've worked together for a long time, we're just going to have a conversation." It even helps now that I'm in the position, because now I know everyone in every department, so I know who to go to when I need an answer for something. Marketing is still pretty new to me, so it's also been so great to be able to reach out to people who I have formed relationships with for questions.

What does a brand project manager do?

LG: Every game has a brand manager who helps create a marketing game plan, which is executed by other teams – Public Relations, Community Developers, Digital Marketing, etc. A brand project manager's role is twofold, first to collect assets and make sure they go to the necessary teams, and second to make sure the brand marketing team is on track with all projects for a game campaign. I help make sure that all the teams are aligned in all communications. I serve as a liaison between the brand team and cross-functional partners including the studio.

What about this job is satisfying for you?

LG: I feel like I'm using my degree more now; this is what I went to school to do. I'm working with a different team in a different capacity. The facilities team allowed me to know everyone but joining the brand team gave me a chance to take the relationships I had before to a much deeper level . Now, the teams change depending on what title I'm working on. . It also allowed me to have a better sense of the pulse of the company. I now know the direction and goals for the marketing team. I'm learning so much now, and it's only been nine months.

Why did you want to stay at Ubisoft when looking for a new career?

LG: I love the people. Everyone here is really diverse. There are a ton of younger people here, but there's also the folks who have been here for 20 or more years, and I like that I'm in that middle ground between the new folks and the long-time veterans. It's also really fulfilling to see someone who started off as a coordinator, and now works as a senior manager or director. Everyone here is willing to share knowledge; it's never been a "fight for yourself" company. We have a very collaborative culture here. They want to see you win, they want to expose you to different things. There were a ton of people who – when I wanted to find a new career path – sat down with me and filled me in on their department and their role to see if it was a good fit for me. There were so many managers and directors that let me pick their brain.

Even our top executives don't act like they're above anyone. Whether it's a senior vice president of marketing or our company president, they're always present and friendly with everyone. It feels like family here.

Now that you've been in this role for nine months, how do you feel about your career now and moving forward?

You mentioned that Ubisoft is diverse. Have you felt that's always been the case in your time here?

LG: It's definitely gotten better. When I first arrived, there weren't many women in upper management. But if you look around now, there's so many women in advanced positions, and it helps you understand that there is room for you to grow and advance as a woman here. We need more women in gaming, but not just in entry-level roles. Seeing a woman in a leadership role here is inspiring, and makes it easier to find role models or mentors. Diversity is also much more than gender. At one point, I felt like I was one of the only black people here, because as a black person, that's often something you look for to get a sense of familiarity. Now, I look around and notice more racial diversity as well. There's always room to grow and improve, but it feels much better now.

What advice would you give to someone looking for a new career that they're passionate about?

LG: Don't take no for an answer. Everything comes full circle, so be consistent in being the best person you can be, because the relationships I built before helped me get to where I am now. Cherish the relationships you make with people. Step back and look and see what it is you want to do, and be ok with trying different things. You have to be really diligent and willing to put in the work. In order to get this position, I had to do double the work. I was shadowing a project manager whenever I could, but I couldn't neglect my job in facilities. I would get here early to try and get ahead just so I could finish by 4 or 5 o'clock, and then stay here a few more hours trying to learn a new job. You really have to sacrifice a lot, but you need to be OK with that and know that it's going to all pay off in the end.