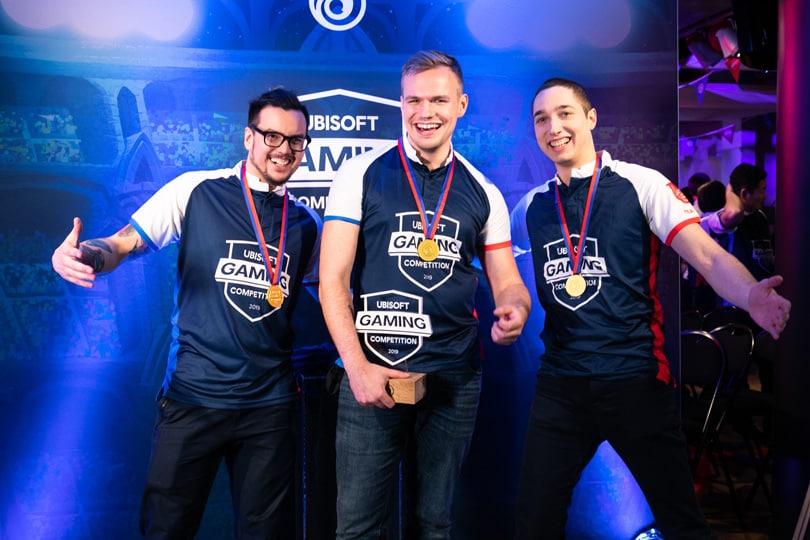 An Inside Look At The Ubisoft Gaming Competition

Earlier this year, Ubisoft employees from all over the world flew to Paris to participate in the Ubisoft Gaming Competition (UGC). Created to foster community among the more than 15,000 Ubisoft employees globally, the UGC drew teams of three from studios around the world, and pitted them against each other in select Ubisoft games. The competition began with local preliminary rounds featuring Just Dance 2019, Hungry Shark World, and Trials Fusion, before moving to the in-person final in Paris, where teams competed to win a trip to E3 – and, more importantly, bragging rights. Competition quickly escalated, as smaller studios like Ubisoft Osaka and Ubisoft Bordeaux had strong showings on their way to qualifying for the live event, where finalists faced off in Brawlhalla and Far Cry Arcade.

In the end, a trio known as "Tea Time" from Massive Entertainment emerged victorious. The team was composed of three game developers from the Swedish studio: Simon Abou Assi, Gustav Bok, and Ricky Chau, who spoke with us about UGC and the road to the championship.

Why did you decide to enter the competition?

Gustav Bok: Mostly because it's fun to play games! Sometimes you need a break from the regular development cycle to get a better perspective on your work. It can also be hard to find time to spend with coworkers, which is why the competition is a perfect excuse to get to know each other better.

Simon Abou Assi: I entered because Trials Fusion was one of the games in the first round, and because a colleague encouraged me to join.

Ricky Chau: I love gaming and competition, so combining the two is a lot of fun.

Did you have experience playing together before the competition?

SAA: Not that much, actually. We only started playing together for the competition.

How did you train for it?

GB: We had roughly three training sessions per week, which lasted a couple hours. We focused most of our training on Far Cry 5, but we did use two sessions for Brawlhalla.

SAA: We trained a fair amount. Each one of us trained individually for the first stage, since we were each playing different games. For the later stages, we trained together on a regular basis, about four hours a week. When we played together, we focused on consistent communication with the team and control of the map – something that proved to be effective in the end.

What games did you compete in?

SAA: I played Trials Fusion in the first round, then we all played Far Cry and Brawlhalla.

RC: I competed in Just Dance 2019 for the qualifier, due to my dancing experience as a B-boy for 12 years.

What was your favorite part of the event?

GB: Apart from getting to know new awesome people and the constant adrenaline before the matches, my favorite part was the release of tension after winning a match.

SAA: The first round of the Brawlhalla match was the highlight for me. It was such a rush of adrenaline and emotion when Gustav came out on top against all odds.

RC: That's difficult to say. I would say the Final in general. Everything about our time in Paris was extremely fun!

Why do you think UGC is important to Ubisoft?

GB: I believe the most important thing that UGC does is show employees that Ubisoft cares about their interests and wants to build more connections between people. Events like these make people want to stay at the company.

SAA: A lot of developers probably enjoy getting a little competitive in games. Having this internal event makes it very accessible for anyone to try competing; you don't lose anything for trying. It's a fun break from work, and maybe it can turn into something people really look forward to each year. Also, going to Paris for the knockout stage and final was great, because we got to meet all these people from Ubisoft studios around the world. If it wasn't for the competition, we never would have met these people. I think that's something really special.

RC: As game developers, our passion comes from games, presumably, so having a chance to compete in games is a lot of fun. It's also a good opportunity for studios to have some fun rivalry. We should always support each other's projects and hope for the best reviews and sales, but competing in games, we can actually have a little bit of rivalry.

GB: The feelings during the final were surreal and intoxicating; the atmosphere and fans watching amped up the stakes. I'm happy to have had this opportunity to share this experience with my friends and colleagues.

SAA: It was intense, but not too much – even second place gets rewarded, so it wasn't all or nothing. Overall, it was just a lot of fun to sit down and play some Brawlhalla with friends and coworkers.

RC: Intense, super-duper intense. Since we competed in it, I felt it was super frustrating to have a good lead and then throw it away, only to have Gustav save the team with some clutch plays. It was such a rollercoaster of emotions.