Prince of Persia: The Sands of Time Remake, unveiled during Ubisoft Forward September, is bringing back one of the most beloved games from Ubisoft’s past on January 21, 2021. Much more than a remaster, the developers at Ubisoft Pune and Ubisoft Mumbai are creating a complete, top-to-bottom remake that aims to recapture the magic of the 2003 original while updating the game for modern sensibilities. To find out more about the project, we spoke with Game Director Pierre-Sylvain Gires and actor Yuri Lowenthal – who reprises his role as the titular Prince – about what’s new, what’s important to preserve, and what the new development teams were able to bring to the classic adventure.

What was the top priority when adapting The Sands of Time for a new audience?

Pierre-Sylvain Gires: Our main focus was to please the players that were asking to replay the game for a very long time. And in terms of content, we wanted to play on the nostalgia, but also we wanted to revisit the three Cs [character, camera, and controls], because the game was a masterpiece. It’s still a masterpiece, but to reach the new audience, we definitely wanted to include the cameras and the combat. That was our top priority.

Yuri Lowenthal: For me, it was just not messing it up. I didn’t want to mess it up, that was my priority [laughs]. But I knew that the team was so in love with the game, I knew Pierre was such a huge fan that he would not let me fall.

What’s it like to come back to this character and his first adventure? Did you want to bring something new to the role? Were you trying to recapture the original performance?

YL: I came back to this OG Prince with a mixture of excitement and abject fear. Ten years ago, I did The Forgotten Sands, but there’s something about that first game, and the Prince that exists in that first game, that is so very close to my heart, and for many gamers who remember playing the game. And I definitely wanted to recapture that, but I know that I inevitably was going to bring something new to it, since I had aged 15 years since that time. 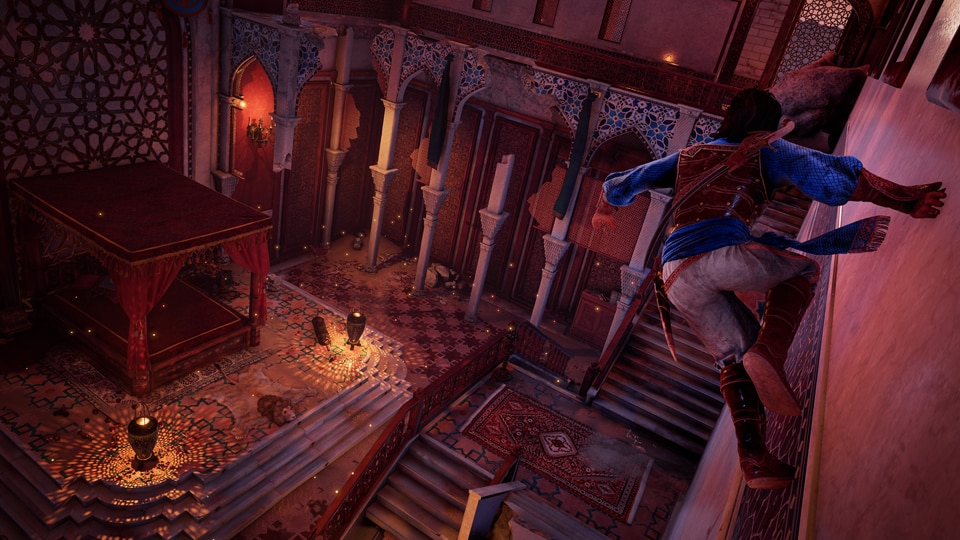 At first, I thought maybe I should try to bring something new to it, and that was definitely a conversation we had early on, me and Pierre. I was trying a little too hard, I think maybe at the very beginning, to try to bring something new, and he said, “Just trust that you’re a different person, but we just need to go back to that original character that we all loved so much.”

In addition to that, [the] new Farah, Supinder Wraich, was so wonderful to work with, and brought so much of herself, and so much power to the role. The relationship of those two characters – which I think is kind of the foundation of that game – is the same, [but] there will be a different feel to it, inevitably. She’s a different person, and I, in a way, am a different person. We always kept going back to, what was it we loved about those characters and that game, and that relationship? And I think we got it! [laughs] I think we got it; what would you say, Pierre?

PSG: You got it absolutely right, and Yuri brought so much professionalism and so much talent that he was a leader for the entire team, and we were all so pleased to be able to work with Yuri.

The remake uses performance capture, while the original Sands of Time didn’t. What was it like reprising the role of the Prince with that added dimension?

YL: Getting to do performance capture this time around was such a gift; it was as if we had gotten to rewind time and do it better. Before, it was just animated, and so there was no performance capture in that game that I know of. Getting to do that this time, and to bring a different level to the acting – having other actors on the stage with me as opposed to everybody recording separately – all of that came together, and for me was a much deeper and much more powerful experience, and I hope that translates. Both for people who’ve played the game before, as well as people who will be playing it for the first time. 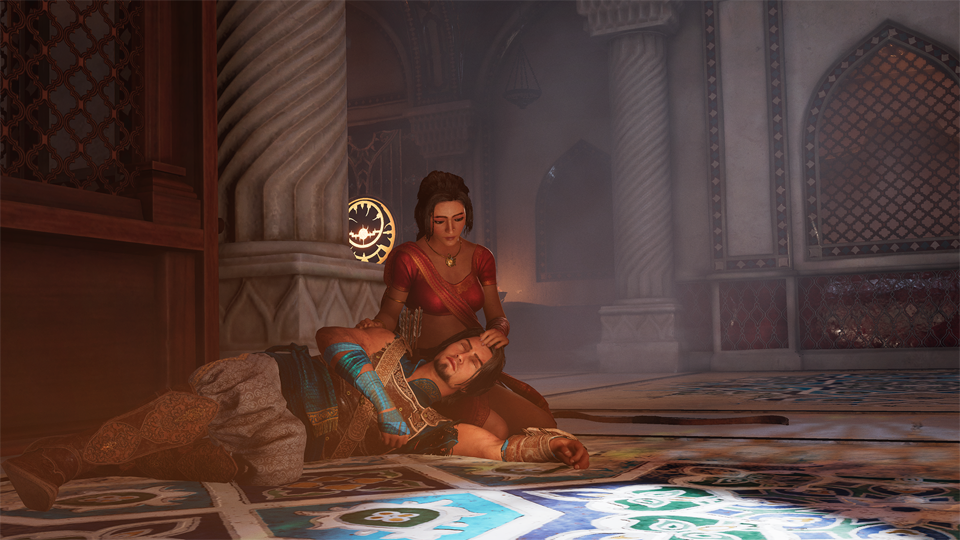 What’s the process of remaking a 17-year-old game like? Were you able to start with original source files, or was it from scratch?

PSG: That’s an adventure in itself. We knew the game, because we all grew up with Prince of Persia: The Sands of Time, but when we had the opportunity to work on this remake, obviously we wanted to put our hands on the closing kit, like the original file. And that was such an adventure, you have no idea. We finally found a few assets, and we actually found a recording of Yuri on DLT tape, like those huge tapes from 15 years ago. We finally found them in Montreal, in a dusty box behind the sound team.

With the help of the people in Montreal, we got our hands on this. And it was amazing to actually open that box, with dust falling from it, and find the game-design document that was still written on paper from [Prince of Persia creator] Jordan [Mechner], and having some of the script from Jordan himself. It was like opening a treasure chest and finding gold. But we rebuilt everything from the ground up, because no files were actually usable because of the engine; we are using Anvil, which was used for Assassin’s Creed Origins. We extracted the metrics from the original game, but we rebuilt everything from the ground up.

This is your first time leading a project as game director, and the first time Ubisoft’s Indian studios have taken the lead on a project this big. What was that experience like?

PSG: As I mentioned, Sands of Time was one of my favorite games, so I knew the game from tip to toe. It was very exciting; we developed this in Ubisoft Pune and Ubisoft Mumbai, the two studios in India. The energy of the team, and the passion the team has for this game, were definitely thrilling, and it helped us to move forward in the production. It’s an amazing experience for all of us, and we are very proud to actually bring you that first full-scale remake for Ubisoft. 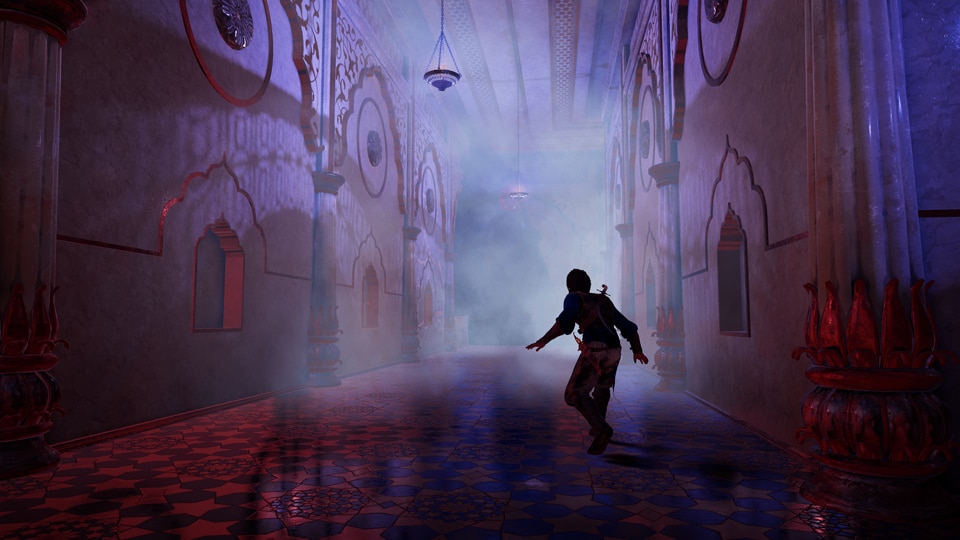 YL: With the energy and passion you displayed when we were working on it, I just assumed that you had helmed so many more games. You had me fooled! [both laugh]

PSG: We’ve been through a few productions here, and we have some senior members that have been working on different titles from Ubisoft. And we also had the help of the other studios as mentoring, regarding the new engine. So it’s definitely a collective work that allowed the Indian teams to build up that game.

What is it about this game that makes it such an enduring fan-favorite, even 17 years later?

YL: Oh man, I think everybody will have their own thing that caught them up in the game in the first place and made them replay it, and made them fall in love with it. It really was a perfect storm of a game for me; the story, and the characters, and the relationship. The gameplay, the puzzles, the world that it’s set in, the music. Everything really came together in a way that… in a lot of other games, both that I’ve worked on and played, you’re like “this part and this part were good about it, but I wish this could have been better.” But so many elements came together on that game for me, and really the classic storytelling element is what kept me coming back. And I know Jordan is a fan of old classic films, and I think he really was trying to get that in there; very classic fantasy storytelling. It kept me coming back.

PSG: I completely agree with Yuri. It’s a piece of art, because of the perfect balance between the combat, the parkour, the puzzles – it was like the first of its genre. It really opened the world for a new type of game for the industry. And for me, it’s a must-play, and I’m not the only one to say so. On top of the beautiful story, it was the art, the ambience, the lighting, and we definitely took that and brought it up to 2020-level expectations. 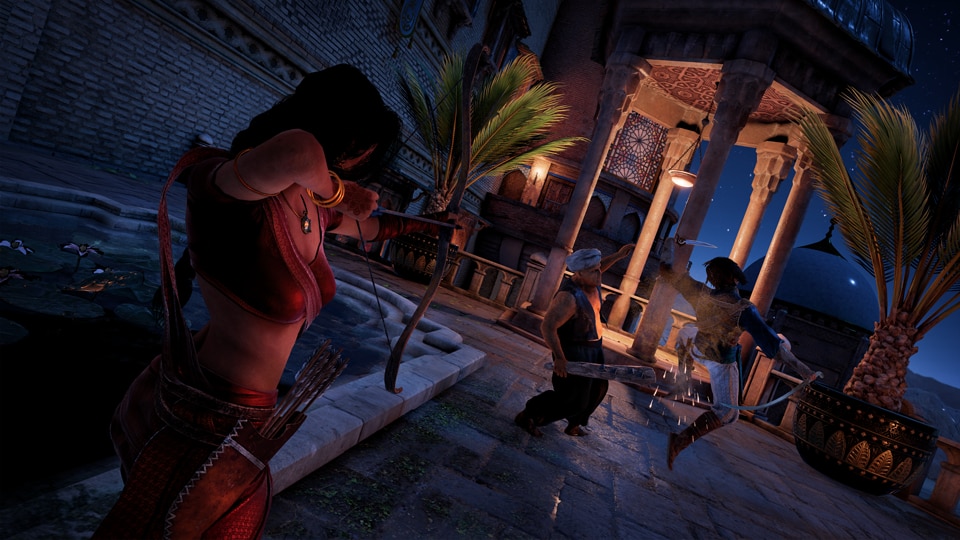 Prince of Persia Remake is being made by a team of mostly Indian developers; has their experience brought a fresh perspective to the game, especially the early stages set in India?

PSG: The concept artists, and all the artists, were so involved, and they work with so much patience and so much love to reflect the true India. We worked on a lot of details, from the patterns, from the colors, and from the architecture. It’s not only about India; it was also a lot of research for Persia, because the second part of the game takes place in Azad, which is in Persia. But we really tried to work on the difference between the two locations, because India is very green and luxurious, while Persia is also very dry, with a very specific type of art. So it was an amazing experience for the entire team, from the concept art, to the materials, to the lighting, I think they did an amazing job on that.

Yuri, do you have a favorite line as the Prince?

YL: It’s hard to choose; there are so many lines that I come back to. For a game that I did so long ago, for me to remember any lines from a game, even a game I did a year ago, is remarkable. The simple answer is “No, no, no, that’s not how it happened, let me try again!” And that whole mechanic, and the sort of comedic angle they took on that – I still reference that in daily behavior sometimes. But that opening narration, that opening monologue: “Some people say time is like a river that flows swift and sure in one direction. But I have seen the face of time, and I can tell you, they are wrong. Time is an ocean in a storm.”

I still get chills when I say it, and it’s very easy for me to recall. And when we were doing it on the soundstage with other actors around, which I’d never gotten to do before, it was a very sort of surprisingly emotional and powerful moment for me as a person, to get to perform that in the way that I did. It’s a wonder, it’s all a wonder.

Prince of Persia: The Sands of Time Remake will launch on January 21, 2021, for PS4, Xbox One, and PC (via Epic Games Store, Ubisoft Store, and UPLAY+), and will also be playable on PS5 and Xbox Series X|S via backwards compatibility. For more on the game, check out our ongoing coverage.