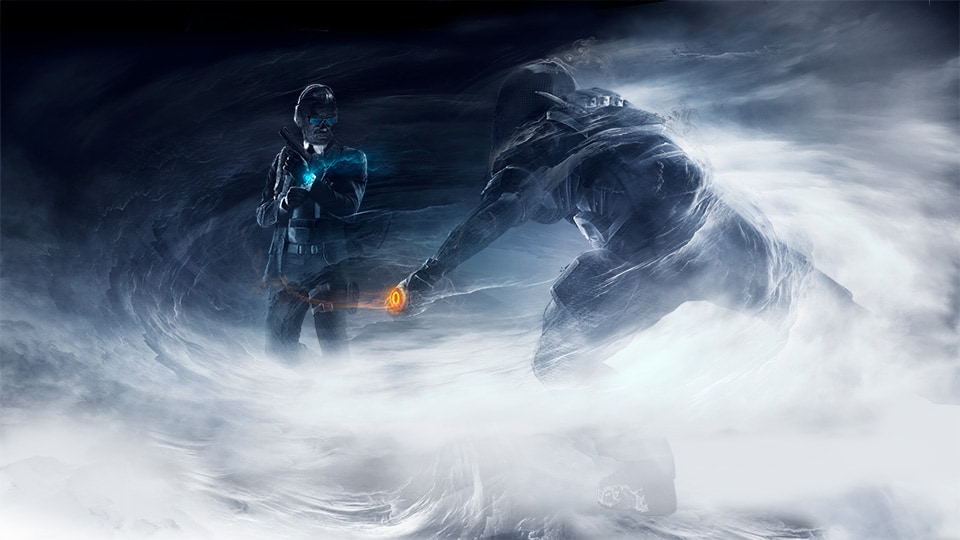 Operation Phantom Sight is bringing two new Operators to Rainbow Six Siege: an Attacker named Nøkk, who can move silently and disappear from camera feeds; and a Defender named Warden, who can make himself immune to flashes and see through smoke. This new season, the second of Year 4 of Rainbow Six Siege, will also introduce a significant rework of the Kafe Dostoyevsky map. Check out the new Operators in action in the video below, and read on for more details on what their gadgets can do.

Warden is a Defender fresh off a stint with the United States Secret Service, and his dapper suit-and-tie getup strikes a distinct profile in Siege skirmishes. Despite his appearance, he's a high-armor, low-speed Operator with either an MPX submachine gun or an M590A1 shotgun as his primary weapon. As a strong site anchor, Warden is uniquely equipped to deal with a flash-and-smoke-filled push from the attacking team, thanks to his Glance Smart Glasses. When active, this gadget makes him immune to flashes, removes any flash currently affecting him, and gives him clearer sight through smoke.

Operators like Blitz and Ying, who rely on flashes to get an edge on their enemies, will have to be more wary when Warden is in the match. And the smokescreens used by Operators like Capitão and Glaz won't conceal them effectively from Warden's sight, even though his gadget doesn't have the thermal detection of Glaz's scope.

Warden can activate his glasses at will, and once the coast is clear, you can manually deactivate them or wait until they run out of juice and need to recharge. Either way, there is a fixed cooldown before you can activate them again, but there's no limit to how many times you can use them in a match. Note that the smoke-filtering feature is less effective if Warden is moving, so picking smart angles and re-positioning quickly are vital to making the most of his gadget. Also, while his glasses are active, you'll need to watch out for the gadget-disabling and gadget-detecting powers of Thatcher and IQ.

On the attacking side of Operation Phantom Sight is Nøkk (rhymes with "book"). Hailing from Denmark's Jaeger Corps, this medium-speed, medium-armor Attacker is a stealth specialist who excels as hunting roamers or flanking surreptitiously. When her HEL Presence Reduction gadget is active, you won't hear her footsteps, and you won't see her on camera feeds. And with so many potential camera feeds available to the Defenders—from default cams to bulletproof cams to multiple Defender gadgets—her ability is all the more impactful.

Her gadget runs on a recharging meter, like Warden's glasses. Unlike Warden's glasses, there's no required cooldown, so Nøkk can turn her gadget on and off and on again whenever she has the juice to run it, giving her more tactical flexibility. Activating her gadget doesn't require her to change weapons, so she can continue wielding her primary, an FMG-9 submachine gun or SIX12-SD shotgun; or her secondary, a 5.7 USG pistol or a D-50 pistol with equippable suppressor. This makes Nøkk a formidable flanking and fragging threat, though like any Operator, she has her limitations.

Nøkk's gadget can glitch and cause a distortion effect that reveals her position on camera feeds. This occurs if she performs basically any action except moving at normal speed or slower, crouching and moving, or reloading or swapping weapons. She will also glitch while moving through barbed wire or taking damage, making Lesion's Gu mines a particularly strong defense against her sneaky schemes. Aside from the glitch, the only other camera interference that will help you detect Nøkk is a waveform effect that appears on Mozzie's hacked drone feed or Echo's Yokai feed when she is nearby.

The new Kafe Dostoyevsky map is part of the development team's initiative to rework existing maps to refresh their design and make them more viable in competitive play. Big changes have been made to the first floor, centering on the main entryway and the extensively remodeled kitchen, as well as to the second floor, where reading-room renovations have allowed the creation of a new bomb site. Numerous smaller tweaks have been made, from the ground floor up to the roof, ensuring that even seasoned Kafe players will have new angles to consider.

The shiny new Kafe map will be free to all players, and will replace the old one when Operation Phantom Sight launches. The two new Operators, Warden and Nøkk, will be available at launch for Year 4 Pass owners, and unlockable for all players seven days later by using Renown or R6 Credits.

Rainbow Six Siege is out now on PC, PS4, and Xbox One. For more on the latest updates, check out our previous Siege coverage.