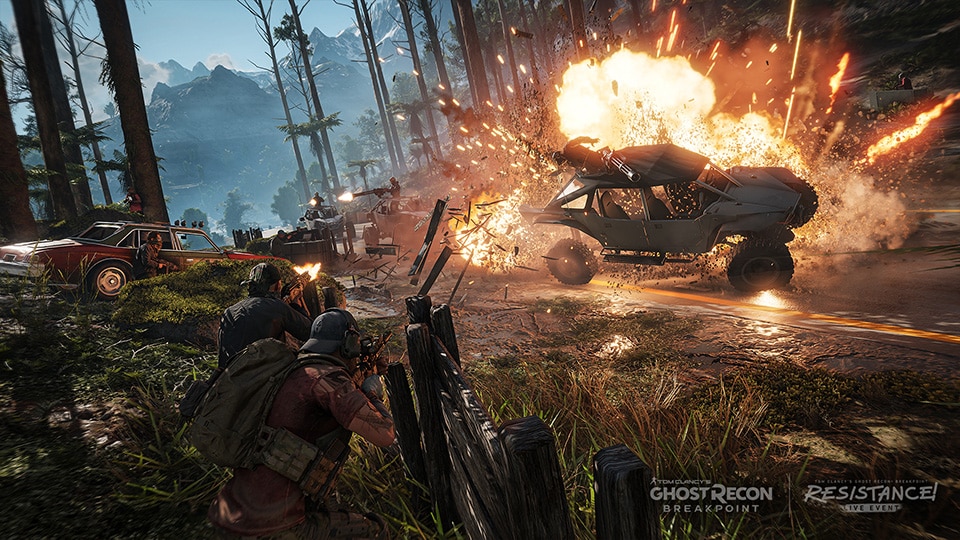 Ghost Recon Breakpoint: It’s the Best Time to Jump (Back) In

Whether you’re an experienced Ghost or a newcomer looking to get into the action, there’s never been a better time to get your squad together and jump into Ghost Recon Breakpoint. Don’t have three friends to fill our your squad? You can now play Ghost Recon Breakpoint with AI teammates. It’s just one of the many features and improvements the development team has been working on behind-the-scenes since the release of the game. We spoke to community developer Grace Orlady and online content director Xavier Plagnal to learn more about these updates, how feedback from the community factors in, and the current state of the game.

Ghost Recon Breakpoint has gone through some changes since launch, so before we get to the most recent update, can you talk about the team’s strategy behind each update up until this point? What were some of the main goals, and how did the community help in achieving those goals?

Grace Orlady: After the launch of Breakpoint, our update strategy has been focused on three main priorities. Our top priority has been to fix bugs and bring more polish to the game; it can take time, but our development does its best to tackle the issues encountered by our players. We usually integrate the fixes in the earliest Title Update possible to deliver them to players as soon as we have them.

Our second priority has been to bring Ghost Recon Breakpoint closer to what the community expects from this franchise. We wanted to listen to the feedback, involve the community in prioritizing the points that were the most important to them, and then address as many as possible. The Ghost Experience update was created specifically to address many of the most frequent points of feedback we had seen since launch, as well as to allow each player to customize their experience. Adding the AI teammates in TU 2.1.0 on July 15 addressed one of the biggest points of feedback since we announced the game, which was to bring them into Ghost Recon Breakpoint.

Live Event missions are free and can be replayed at any time, even after the Live Event stops. Our current Live Event is called “Resistance!” and features the Outcast faction launching their counterattack against Sentinel. Our players offer the Outcasts support to see their resistance grow, which will have real impact on their presence in Auroa while the event is live.

How did you decide which commands to give players for issuing orders to their AI teammates?

Xavier Plagnal: We wanted to emphasize a smooth game experience with the addition of the AI teammates. In that regard, their purpose is to work as efficiently as possible so that most players will not need to order them around. However, for the players who like additional control, we wanted to focus on the most important orders: “Cleared Hot” (Open Fire) to instruct the AI teammates to shoot at any hostiles nearby; “Regroup” to call them close to the player; and “Go To” to send them to a location.

These orders allow our players’ experience with AI teammates to be as close as possible to the one they had in Ghost Recon Wildlands.

It seems like adding AI teammates can affect the moment-to-moment balance of gameplay. How challenging was it to integrate this feature, but still make the AI teammates feel like a natural extension of the Ghost Recon Breakpoint experience?

XP: Ghost Recon Breakpoint was not originally designed with the technical infrastructure to support AI teammates. When we announced the game, we also announced that teammates were not going to be included in this installment. However, when we saw the reaction to that announcement and how strongly our players felt about their inclusion, we felt it was important to invest the time, resources, and personnel needed to integrate them into the complex existing game systems. In that sense, it was challenging, but we felt it was absolutely worth it to bring them to players even if we were not able to do so at launch.

AI teammates are great allies for all solo players, as they are able to support players in firefights, revive them, shoot from moving vehicles, etc. AI teammates do not affect enemy difficulty settings in any way; keep in mind that the difficulty became highly customizable with the Ghost Experience update.

The AI teammates themselves are also fully customizable, (including gender, appearance, and outfit) from head to toe. Players can choose their teammates’ primary weapon, provided they have bought or found the blueprint for that weapon, and each teammate’s engagement rules adapt depending on the primary weapon they have equipped. Lastly, players can take down up to seven targets at once by combining drones and teammates for a lethal sync shot.

This has been a huge endeavor, and it has only been possible thanks to the dedication of the team that worked hard to make it happen.

How do you prioritize feedback from the community? Is there a method for determining which updates will be the most effective, and how do some of the most recent fixes reflect that?

GO: We have a variety of different methods that we use to gather and prioritize the feedback from our community. First, we have a team of community managers and representatives who are integrated in all of our online conversation spaces, in multiple languages, to ensure that we have experts whose job it is to understand what is important to our global community, and summarize it for our development team.

We also have a few different tools that allow us get a quantified understanding of how much a specific topic has been mentioned in relation to other topics, as well as the way it is being spoken about. This allows us to add another dimension when it comes to prioritization.

During the Ghost Recon Breakpoint post-launch, we knew that we couldn’t just gather the feedback ourselves; we needed to involve our players in prioritizing what was important to them. This resulted in the Community Survey, which greatly helped us see which key topics were the most critical to our players.

And, of course, we also have our Ghost Recon Delta Company. We frequently involve them in the feedback process to offer their candid feedback on concepts and early builds.

“Resistance!” is the live event currently happening in-game. How does the team design these live events? What are some of the key features that make a live event successful, and how do those manifest in “Resistance!”?

XP: Live Events are really fun opportunities for us as developers! Because of their timed nature, we can experiment with them and do things we could not do in the main campaign. While designing Live Events, we focus on finding an interesting world modifier that will change the experience for the duration of the event, and use this modifier to disrupt the existing world. In the first Live Event, it was Terminators roaming the world.

In the case of “Resistance!”, we wanted to bring a little bit of flavor from Ghost Recon Wildlands’ rebel warfare mechanic, and use it as inspiration. “Resistance!” will see the Outcast faction counterattacking Sentinel forces out in the open world. We think it adds a really fun and engaging dynamic to the world to see the growth of the resistance among the Outcasts based on the actions of the player.

It starts with occasional patrols of Outcasts fighting with Sentinel. As you progress during the Live Event, the Outcasts will occupy checkpoints and start to use helicopters for their patrols, upping their game against Sentinel while bringing a fun, chaotic element to the open world.

Ghost Experience was a major update for Ghost Recon Breakpoint. What’s been the reaction to it so far, and can we expect ongoing tweaks and updates?

GO: We’ve been so thrilled to see the positive response to the Ghost Experience so far! Our community has been very receptive to having the ability to create their own personalized game experience.

By offering our players options to control things like how frequently they’re injured by enemy bullets, how many bandages they can carry, how many primary weapons they can equip, etc., the Ghost Experience answered a lot of the community feedback we received at launch.